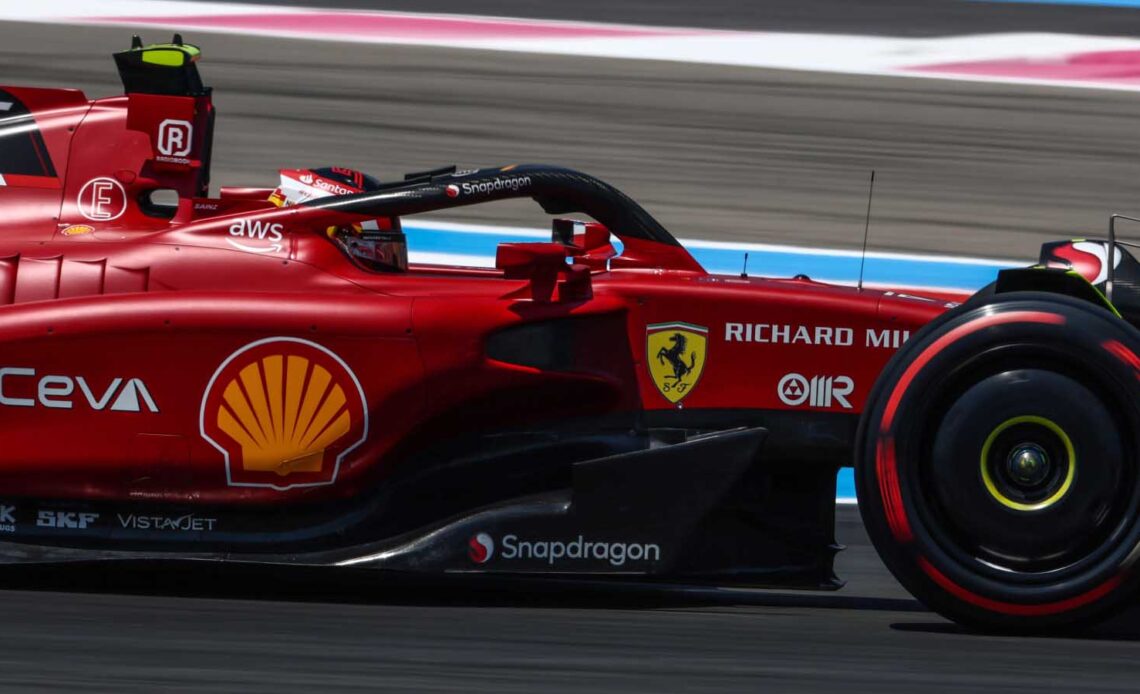 Carlos Sainz pipped Ferrari team-mate Charles Leclerc to top spot in FP2 at Paul Ricard, half a second in front of Max Verstappen in third.

It was a strong show of pace for Ferrari on Friday, as they laid a marker down by showing significant speed as they tested in qualifying trim at Paul Ricard.

The Mercedes duo of George Russell and Lewis Hamilton rounded out the top five, but Russell found himself 0.764s behind Sainz’s impressive pace-setting time.

Behind them, Pierre Gasly will likely have been pleased with P7 after significant upgrades have been brought to AlphaTauri, with Kevin Magnussen also in the top 10 for Haas – with Red Bull’s Sergio Perez one-and-a-half seconds off the pace in P10, albeit with fewer laps than his rivals.

Leclerc narrowly got the better of Verstappen in FP1 earlier in the afternoon, and the weather was just as scorching as the cars got back on track for more practice running, mostly running medium tyres to begin with.

Hamilton jumped back into his Mercedes after sitting out the first session, with Formula E World Champion Nyck de Vries having taken his place as part of a mandatory FP1 run for their reserve driver.

The four Ferrari and Red Bull drivers were the last to emerge on track in FP2, sitting out the first 10 minutes as the remaining cars circulated, with the Alpine pair of Fernando Alonso and Esteban Ocon having set the early pace – Alonso sitting top on a 1:35.531 after the first flying laps.

Mick Schumacher had put himself in the top three early on, but scuppered a flying lap after sending his Haas into a spin at the long double right-hander of Le Beausset. The abrasive blue and red stripes in the run-off areas did their jobs, however, and helped stop his car before hitting the wall.

But once the front-runners emerged, Leclerc and Verstappen put themselves at the top once again, with a 1:34.172 from the Red Bull driver making him fastest and only 0.010s ahead of his title rival.

Sainz, meanwhile, who has a minimum 10-place grid penalty coming his way this weekend for taking a new control electronics system, bypassed a medium tyre run altogether and went straight to his qualifying simulations, taking a big chunk out of Verstappen’s time to clock a 1:33.322.

The rest of the field then followed suit in putting soft rubber on their cars, with Leclerc trading fastest laps with…