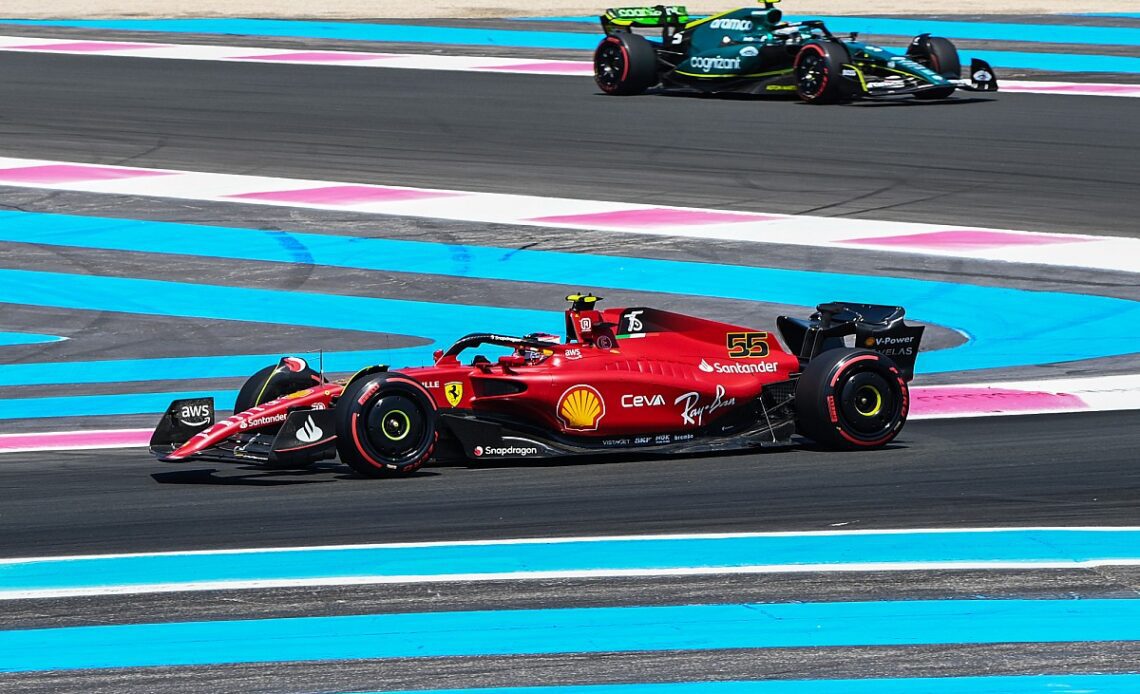 His teammate Charles Leclerc was fastest in FP1 but Sainz set the fastest lap of the day in FP2, with Red Bull’s championship leader Max Verstappen in third.

Verstappen set the bar at 1m34.991s, running soft tyres from the start of the session, half a second clear of teammate Sergio Perez (who suffered a big spin at Turn 3 early on and later straight-lined a chicane) and 0.83s clear of Leclerc at the halfway point.

Verstappen lowered his time to 1m34.346s, but that was almost immediately beaten by Sainz – who will take a grid penalty after his Austrian GP engine failure – with 1m34.256s.

Top spot then became a straight Verstappen v Leclerc fight. Verstappen set 1m34.021s, despite a big moment as he understeered over the kerbs at the exit of Beausset and damaged his floor edge.

But Leclerc topped that by 0.091s with 1m33.930s, despite a poor middle sector where he lost two tenths of a second. Sainz stayed third, over three tenths off the pace, ahead of George Russell’s Mercedes, Pierre Gasly’s updated AlphaTauri and Perez.

Nyck de Vries subbed for Lewis Hamilton at Mercedes in this session and was ninth fastest, half a second off Russell. Robert Kubica was also in for Valtteri Bottas at Alfa Romeo, and was 0.656s off teammate Zhou Guanyu in 19th place.

Leclerc set the pace after 15 minutes at 1m34.182s, as all teams ran the medium tyres from the start of the session. Verstappen beat that by 0.01s with 1m34.172s, before Sainz was the first of the frontrunners to switch to softs, unleashing 1m33.322s – highlighting a 0.85s delta between the compounds in similar track conditions.

Leclerc beat his teammate for P1 by 0.186s with 1m33.136s just before the halfway point, but Sainz responded on a second push lap with 1m32.527s. That proved to be the fastest lap of the day.

Verstappen got to within half a second of that, complaining of excessive understeer that sent him pitwards for changes ahead of his long run, before Leclerc produced 1m32.628s to reclaim a Ferrari 1-2, 0.101s down on Sainz.

Russell was best of the rest in fourth, over a quarter of a second off the pace, ahead of teammate Hamilton.

Mick Schumacher suffered a wild high-speed spin at Beausset early on, but just kept his Haas out of the wall.