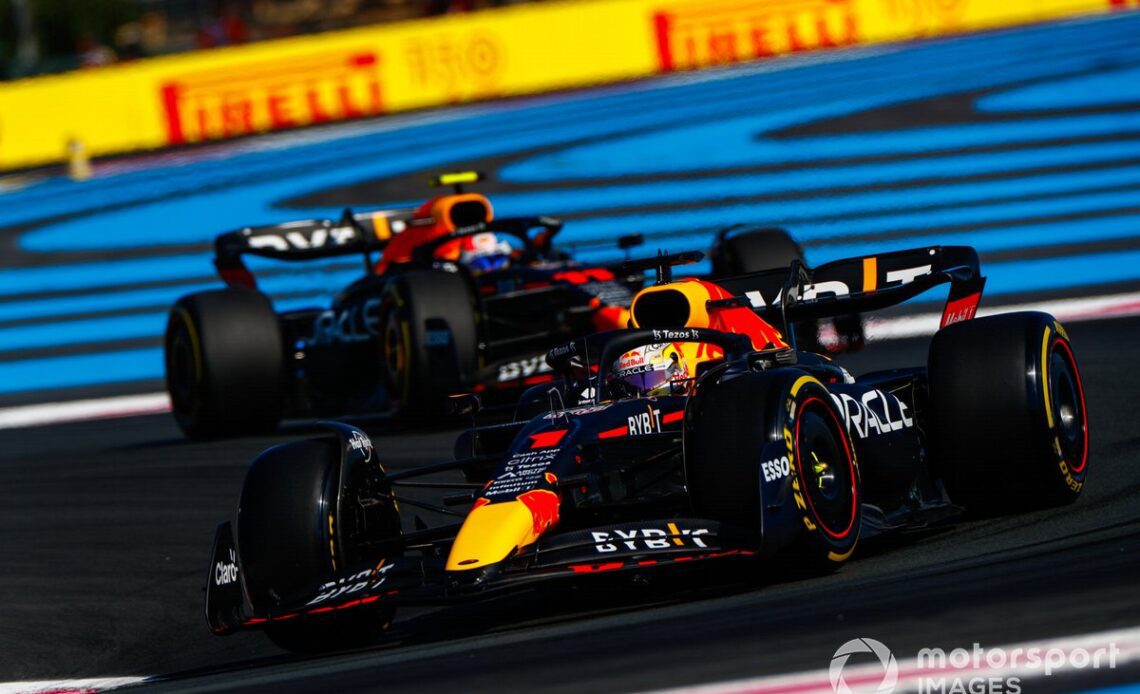 In the second one-hour session of the day run in sweltering, cloudless conditions at the Paul Ricard circuit, Alfa Romeo duo Valtteri Bottas and Zhou Guanyu led the pack out.

Bottas duly set the first place benchmark at 1m36.887s, with all the early running conducted on the medium compound tyres.

Zhou, Mick Schumacher and Esteban Ocon all set quicker times on their first FP2 fliers, with Fernando Alonso ending the opening five minutes on top thanks to a 1m35.531s on the yellow-walled rubber.

Just over five minutes later, Haas driver Kevin Magnussen surged ahead on a 1m35.386s, before he was quickly deposed by George Russell’s 1m34.810s.

The season’s big hitters – Ferrari and Red Bull – had yet to leave the pits at this stage, before Leclerc emerged just before the 15-minute mark and, on his first flier moved to the head of the times with a 1m34.182s, which immediately put him 0.6s clear of the pack.

Verstappen came out a few minutes after Leclerc and, as he did in FP1 and has done in many practices so far in 2022, immediately took the top spot – setting a 1m34.172s having done two warm-up laps on his mediums.

That topped the times at the end of the session’s first 20 minutes, at which point Sainz – who had missed FP2’s first third as Ferrari changed his car’s floor – headed out straight on the soft tyres.

The Spaniard took the red-walled rubber to purple sectors in all three segments and took first place with a 1m33.322s – an improvement of 0.850s over Verstappen’s best effort on the mediums.

A few minutes later, Leclerc came back out and was now running the softs, which he used to jump ahead of Sainz on a 1m33.136s as he edged out his team-mate in sectors one and three, while pretty matching him in the middle third to run 0.186s clear.

Sainz had pitted after his first softs flier and, after Ferrari had made a few adjustments, he returned to action on the same set of C2 softs.

Now running just past the session’s halfway point, Sainz recorded significant gains on Leclerc’s lap in all three sectors to blast back to the top spot with a 1m32.527s – getting a nice tow from Pierre Gasly’s AlphaTauri as he ran down the pit straight to close out his lap.

By this stage, Verstappen had come out again to run the softs for the first time, but encountering understeer through the technical section at the end of the…