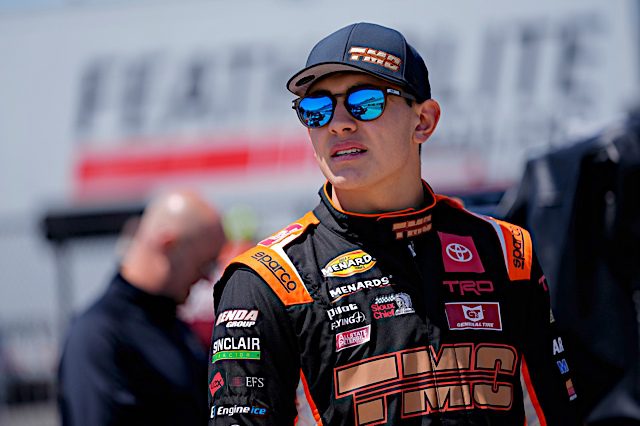 For the third time in his ARCA Menards Series career, Sammy Smith will lead the field to the green flag. Smith won the pole for the ARCA race at Pocono Raceway on Friday (July 22) after inclement weather forced series officials to prematurely end the practice session and cancel qualifying. As a result, Smith will start first in the 28-car field, with zero DNQs.

After winning the most recent ARCA race this season at Mid-Ohio Sports Car Course, Taylor Gray will start second.

Nick Sanchez paced the field in the pre-race practice session on Thursday, and he will round out the starting top five in fifth place.

Brandon Jones has won both his ARCA starts this year, and he’ll start sixth.

Due to an on-track incident, Greg Van Alst will go to a backup car.

Significant damage to the right side of Greg Van Alst’s No. 35 ARCA machine after earlier contact in practice. Crew is preparing a backup car for tonight’s race. #ARCA pic.twitter.com/A0Gq8kHB4g

Van Alst therefore will drop from his 13th place starting spot to the rear of the field before the start of the 80-lap race.

Smith will lead the ARCA field to green in the General Tire Delivers 200 later today at 6:30 p.m. ET with TV coverage provided by FOX Sports 1.