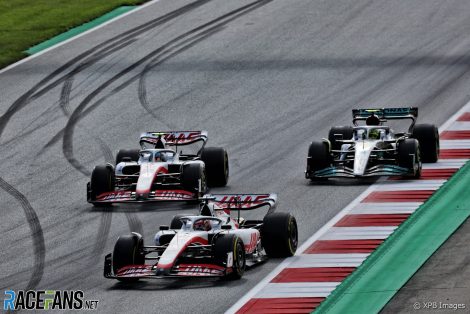 Mick Schumacher says he still doesn’t fully agree with his Haas team’s decision not to swap the running order of their cars during the Austrian Grand Prix sprint race.

The team’s two cars ran sixth and seventh during the opening stages of the race, Schumacher following Kevin Magnussen. Haas chose not to swap the positions of their drivers despite Schumacher repeatedly telling them he was quicker than his team mate and asking to be allowed ahead.

Schumacher, who at one stage also asked if Magnussen would slow down so he could benefit from DRS, fell behind Sergio Perez and Lewis Hamilton by the end of the race and finished out of the points. “I don’t agree, like, seriously,” Schumacher told his team on the radio after taking the chequered flag. “We’ll talk about it.”

Speaking to a select group of media ahead of this weekend’s race in France, Schumacher confirmed he “had a conversation about it” with his team, and some difference of opinion remained over their sprint race tactics.

“I think there’s a situation where you kind of agree to disagree,” he explained in response to a question from RaceFans. “At the end, for me, for example, they’ll never know what could have happened if I’d gotten by.”

He wants to have clearer expectations about how the team will handle similar situations again.

“It’s just a matter of maybe understanding it also better from my side previous to the race for example, just that there is no question mark,” he said. “If there’s a chance I’ll pass by and if it doesn’t work out we’ll just swap back.

“I think there’s also growing and understanding from both of us. From my side and also from their side.”

He enjoyed a better result in the grand prix, claiming a best-ever finish of sixth place. It was his second points finish in a row after taking the first of his career at the British Grand Prix a week earlier.

Schumacher is optimistic the team can continue that run this weekend. “We’ve been on a roll since Silverstone, and Canada as well,” he said.

“So I kind of have the feeling that wherever we go, we’re pretty okay. At least we’re in the top 10. So I think that there’s a good chance that we’ll score points this weekend again, if everything goes our way right away, for sure.

“If not, then maybe there’s a chance that we might not achieve that. But I’m very positive and…