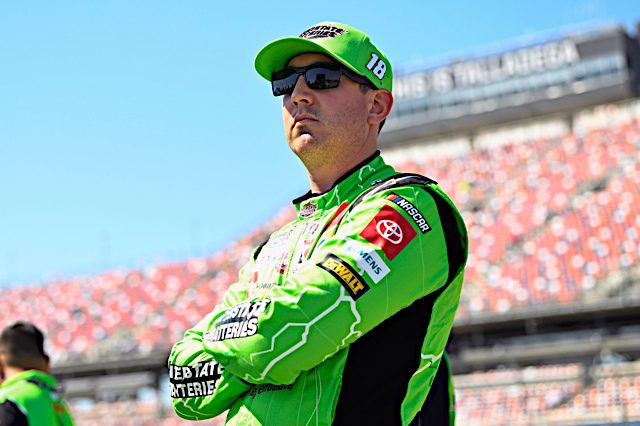 It has been three months since Kyle Busch told reporters he wanted his contract extension with Joe Gibbs Racing done “yesterday,” and that extension has still not been completed.

Busch is the most accomplished active driver in the NASCAR Cup Series, and JGR is consistently one of the best teams in the garage. Both parties want to continue their relationship, which has netted two championships and 56 wins at the Cup level.

And I’m sure both parties are aware the grass isn’t always greener on the other side. The next driver of the No. 18 (which, let’s be honest, would probably be Ty Gibbs should Busch leave) might not have as much success as the future NASCAR Hall of Famer. And they certainly wouldn’t sell as much merchandise, have a documentary made about them or field a NASCAR Camping World Truck Series team for Toyota to grow its talent. Not right away, at least.

Top-tier rides are also hard to come by, so Busch would be taking a huge risk. Sure, Stewart-Haas Racing supposedly has a seat open, but that team only has two wins in the past two seasons. It’s going to take a lot of work to get SHR back to JGR’s level.

So why can’t Busch and JGR both just sign the dotted line and maintain their union?

The two big issues appear to be sponsorship and salary.

Even though the team has known all season that Mars, Inc. is leaving at the end of 2022, replacing such a gigantic sponsor is easier said than done. A short while ago, it seemed like the team was close to landing a sponsor. But recent quotes from Toyota Racing Development President David Wilson indicate that the sponsor fell through.

“I wish I could handicap it for you … but I just can’t,” Wilson told NBC Sports. “We’re in a bad place right now. … We’ve got some tremendously heavy lifting in front of us.”

Busch may get booed at driver introductions, but he’s consistently voted as one of the most popular drivers in Cup. He’s one of the few drivers casual sports fans will know and the only active multi-time champion. When someone of his caliber can’t land a sponsor, it’s a bad sign for the rest of the NASCAR.

Sure, Chase Elliott just signed an extension with NAPA, but it seems there is a business-to-business aspect between the sponsor and Hendrick Motorsports.

I think they are saying that without the ability to leverage B2B it’s extremely difficult.

A huge reason Busch and JGR can’t find a sponsor? The…