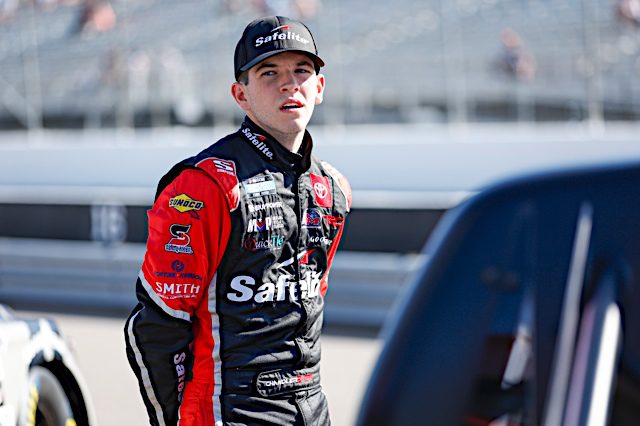 Smith held off Ryan Preece in the closing laps to claim his second victory of the season.

Cautions plagued the race, starting with three in stage one. Two cautions were for minor spins, but the last one was much bigger and ended some drivers’ days. On lap 12, Todd Bodine was in the middle of three-wide racing when Hailie Deegan made slight contact with his right front. He spun and crashed into the outside wall, while Tyler Hill and Jack Wood crashed behind him. Wood then slid into Bodine.

With Todd Bodine out of the race, Zane Smith has clinched the regular-season NASCAR Truck Series title. https://t.co/IiSe8wZTOx pic.twitter.com/qjBp0zrLVF

The damage was too much for Bodine to continue on, and his 800th national series start ended in heartbreak.

Stage one ended under caution, with Chandler Smith claiming the victory and Zane Smith clinching the regular season title.

After the race got back underway, things were much calmer in stage two. Pit strategies varied, with Chandler Smith coming down pit road shortly before the end of the stage. But Eckes, who ran second to Smith, stayed out and earned the stage two win.

Chandler Smith was able to get out into the lead in stage three and defended the position to win his fourth career race at Pocono.