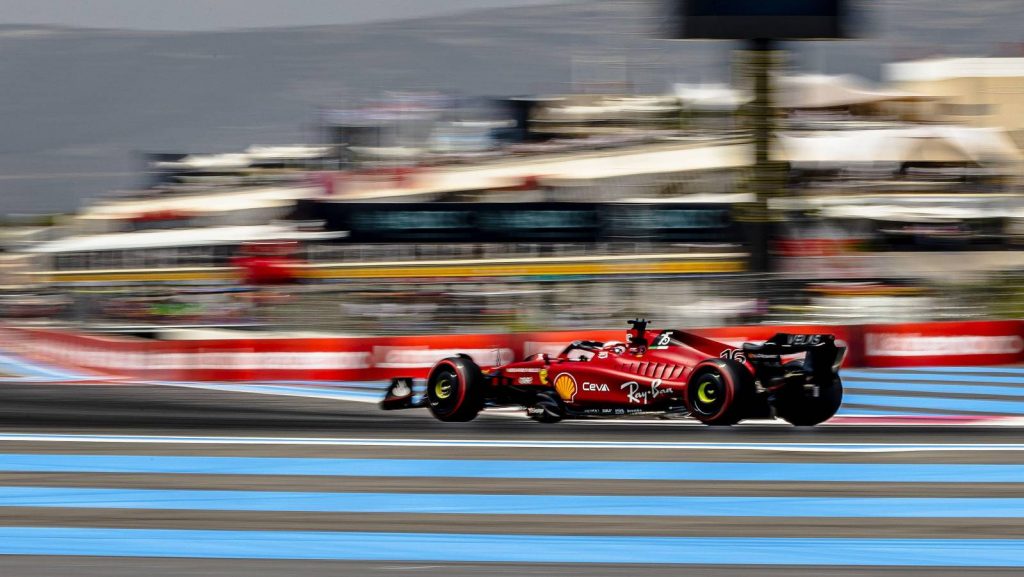 Leclerc stormed to pole position for the French Grand Prix at Paul Ricard, making the most of a tow supplied by his Ferrari team-mate Carlos Sainz to pip Red Bull’s Max Verstappen by three-tenths of a second.

But while Ferrari enjoyed the upper hand in single-lap pace, Verstappen could have an advantage during the race as Red Bull are running a lower-downforce set-up than Ferrari have opted for.

While DRS usage is available on every lap during qualifying, Leclerc will not have access to DRS early in the race if he maintains his lead from pole – potentially an issue against the Red Bull if Verstappen can stay within a second of the Monegasque before the long back straights.

With the two leading teams going down different set-up routes for Paul Ricard, Ferrari’s sporting director Laurent Mekies has admitted holding off Red Bull could be a big challenge, especially given Sainz starts from the back of the grid due to an engine grid penalty.

“It will be tough,” Mekies told Sky F1 after qualifying. “We know the weekend doesn’t stop on Saturday. We know, overall, we have been quite fast on Saturdays. This one comes with a bit of better taste because we were not that fast this morning [in FP3].”

Mekies echoed Leclerc’s praise of Sainz’s willingness to play the team game during Q3 as he gave Leclerc a tow down the straight.

“We had great teamwork to achieve that pole position with Carlos’ help,” he said, before recalling memories of the team’s unhappy 2021 race when neither Leclerc nor Sainz made it into the points.

“But we don’t forget that on this sort of track, very front-limited with high degradation we suffered in the past, it will be tough tomorrow – there will be two against one and we expect a good fight.”

Asked whether the higher downforce set-up may turn out to be a mistake during the race, Mekies said their chosen level is where they had the most pace.

“It’s been a trend that we have been running slightly more downforce and therefore more drag compared to [Red Bull],” he said.

“The trade-off is easy to see. You may get a bit of better tyre degradation with more downforce,…