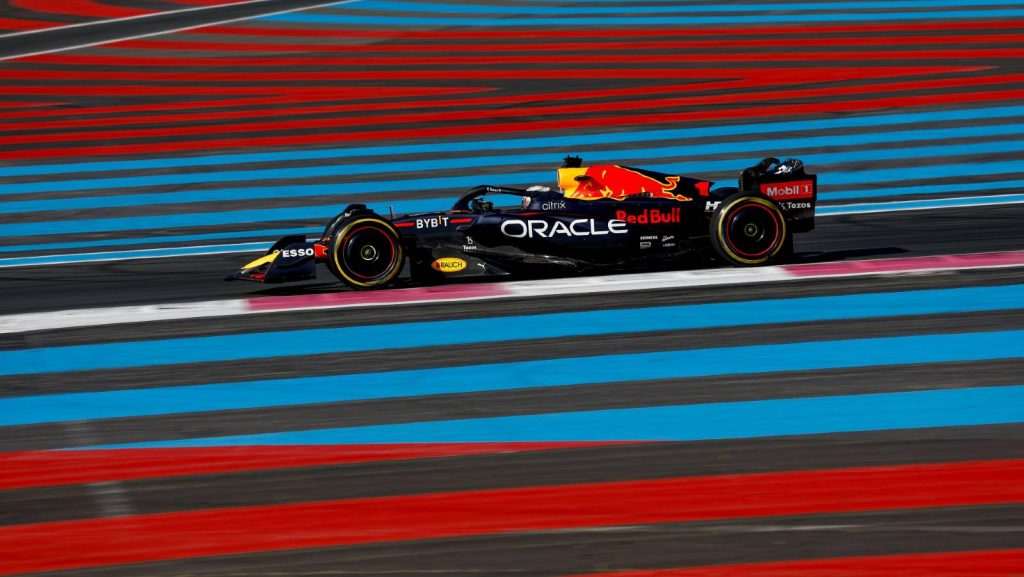 Max Verstappen is eager to see which setup approach will win out in the French Grand Prix, with Red Bull and Ferrari going in opposite directions.

The Dutch driver lines up in second place for Sunday’s French Grand Prix at Paul Ricard, having been beaten by three-tenths of a second as Ferrari’s Charles Leclerc won out in the qualifying battle.

Leclerc benefitted from a tow supplied by teammate Carlos Sainz, with the Monégasque thanking the Spaniard in the immediate aftermath of the session. Sainz proved willing to play the team game, as he was out of contention for a front-row start as a result of a grid penalty.

Unlike Ferrari, Red Bull chose not to go down the route of messing around with towing their drivers, with Sergio Perez qualifying in third place to ensure a potential double-pronged attack on Leclerc for the lead of the race.

Verstappen explained why Red Bull chose not to try attacking Ferrari with a tow.

“We both didn’t have a penalty, so we both wanted to have the best possible [session],” he told Sky F1.

“I fully understand, of course, why [Ferrari] did it.”

Verstappen had been convincingly quickest during the final practice session, but admitted Red Bull had been missing a final ingredient when it came to pursuing pole position.

“Well, FP3 is not qualifying, clearly,” he said.

“But, overall, I think we were lacking a bit in qualifying, just general grip. So it was a bit more tricky than I think I would have hoped. But I think we still have a decent race car and hopefully tomorrow will come to our favour. We are quick on the streets. Hopefully, we can use that tomorrow.

“It’s also going to be a bit warmer, but clearly they’ve been really quick again.”

Red Bull and Ferrari have taken different setup philosophies to the Grand Prix, with Ferrari choosing for a higher downforce setup that should protect their tyres more, but leaves them exposed down the long Mistral Straight. Red Bull’s lower-downforce choice might give them the edge down the straights, but has the trade-off of potentially causing more tyre wear.

“I think, in general, we have a little bit of a different philosophy of how to go fast around here, and we are a bit faster on the straight,” he said.

“Of course, that hurts us a little bit in especially the high-speed corners in the last sector but it’s gonna be interesting tomorrow with what is the fastest philosophy? We’ll find out. From outside, we’re confident that we can do a good job,…