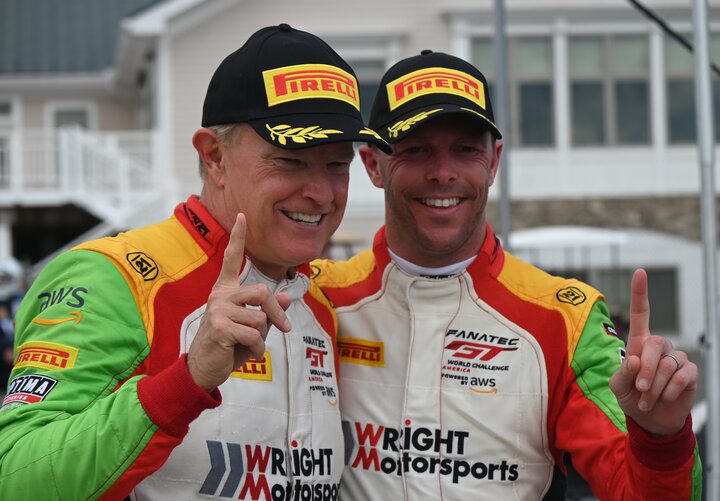 WATKINS GLEN, N.Y. – A series of left front tire issues in the final 25 minutes of the race Saturday put Wright Motorsports’ Jan Heylen in the overall lead in his Pro-Am class Porsche.  He held off a late charge from Crowdstrike Racing with Riley Motorsports’ Colin Braun to claim victory in Fanatec GT World Challenge America Powered by AWS Race No. 1 at Watkins Glen International along with teammate Charlie Luck.  It is the first overall victory for both drivers.

“It was a fun race like it should be with lots of pressure from behind,” Heylen said after the race.  “Charlie [Luck] did a really good first stint.  Feels good to be back on the top step of the podium.”

K-PAX Racing’s Michele Beretta led from the pole in his Lamborghini Huracan GT3 Evo.  The start ended up being a substantial scramble after Winward Racing’s Russell Ward did not get a good start.

US RaceTronics’ Steven Aghakhani was able to sweep past into second at the start, but lost second to Turner Motorsport’s Michael Dinan at the Inner Loop.  While the battling continued on-track, Zelus Motorsports’ Jeff Burton spun his backup Lamborghini in turn 7 and appeared to high-center the car on the curbs.

The incident brought out the race’s first caution.  Luckily, Burton was able to extricate himself and continue, but this ended up being the least of his problems.

Shortly after the restart, K-PAX Racing’s No. 3 Lamborghini with Misha Goikhberg driving slowed on-track with a misfire.  This actually drew another caution as Goikhberg limped the car back.  He eventually got to the aid of his crew, but ended up nine laps down.

The trouble for Burton only got worse as he appeared to clip the grass under braking for turn 8.  This spun Burton’s Lamborghini head-on into the Armco Barrier and brought out the third yellow of the race.  Burton was ok, but the team is looking at a big rebuild in order to have a car available for Burton to drive on Sunday.  The car wrecked here was Burton’s car for GT America after Burton wrecked the primary car in qualifying Saturday morning.

In Pro-Am, Crowdstrike Racing with Riley Motorsports’ George Kurtz, fresh off of his victory in GT America Race No. 1, started from the pole.  However, the opening lap scramble saw BimmerWorld Racing’s Chandler Hull come to the lead.

Hull appeared to have strong pace, but extremely bad luck.  Shortly after the first full course caution, the trunk latch broke on the BMW M4 GT3.  As…