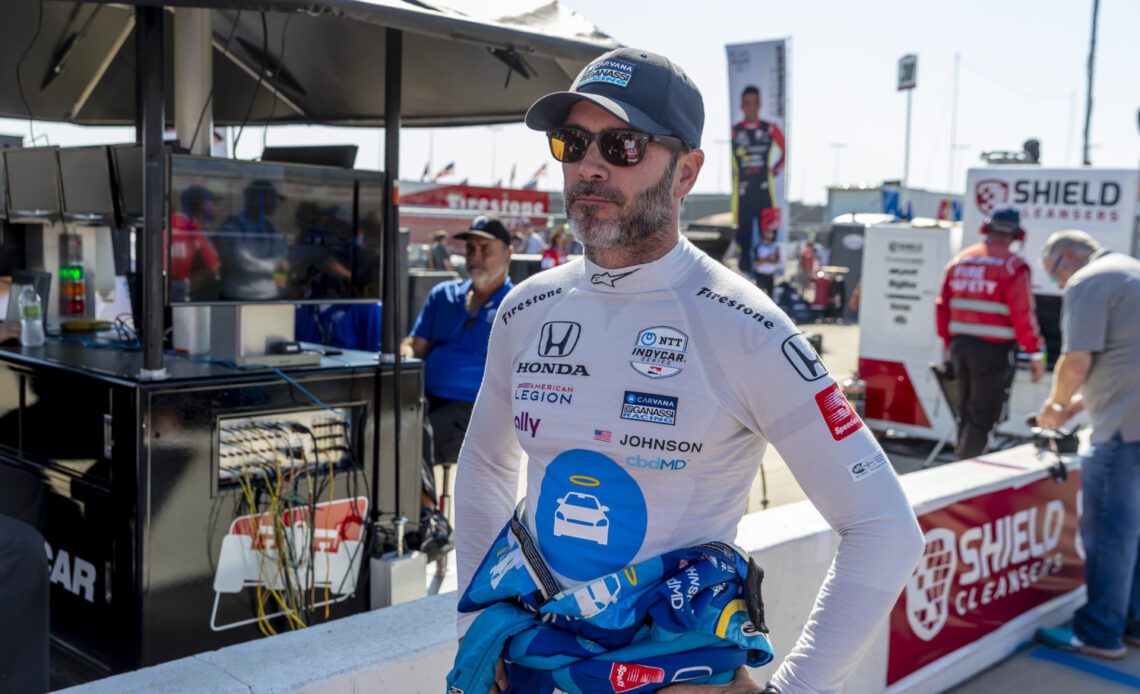 With the NTT IndyCar Series back on an oval Saturday at Iowa Speedway, Jimmie Johnson was back to form, coming home with an 11th place result in the Hy-VeeDeals.com 250.

Though it ended with the seven-time NASCAR Cup Series champion banking his best finish since Texas back in March, Johnson would have to find out the hard way just how tricky the 0.894-mile track can be in an open wheel car.

After starting the race in 15th, Johnson went for a spin on lap 17 when his left front wheel crossed over the painted line at the bottom of the banking, sending his No. 48 Chip Ganassi Racing Honda around. Avoiding contact with the wall and any other cars, Johnson escaped the incident without any damage and was able to get back in the action after a trip to pit road.

“In a Cup car, you could always hang your left front tire on the paint. You might remember at Richmond, we’d chase the paint and it works. It doesn’t work in an IndyCar,” Johnson explained.

“Instinctively, I tried to run the painted line like I would in a Cup car and as soon as I touched it, I was like ‘Oh, you idiot. Why’d you do that?’ Thankfully, I kept it out of the wall and was able to bump start it once it got going on the frontstretch in the right direction.”

As the first half of the race continued on, Johnson was able to use his early miscue to his advantage, playing the long game and staying out on track longer than the leaders to eventually take over the lead for himself on lap 61.

Johnson would pace the field for 19 laps, lapping all but three cars before making his way back down pit road for service.

Falling a lap down during the cycle, Johnson came back out in track within sight of leader Josef Newgarden, unlapping himself a short time later and then setting off to regain his lost track position.

Undeterred by his early race spin, Johnson was aggressive in his pursuit of the cars ahead of him, making some Sportscenter worthy moves, including a pass around the outside to overtake Jack Harvey and Devlin DeFrancesco in one fell swoop. By lap 103, Johnson was back in the top-five.

Fluctuating between fifth and 10th for much of the second half of the race, the last stint of the race would be Johnson’s undoing as the long green flag run brought tire management into the equation and the worn-out Firestones on Johnson’s car caused him to fade back to 11th by the time the checkered flag fell.