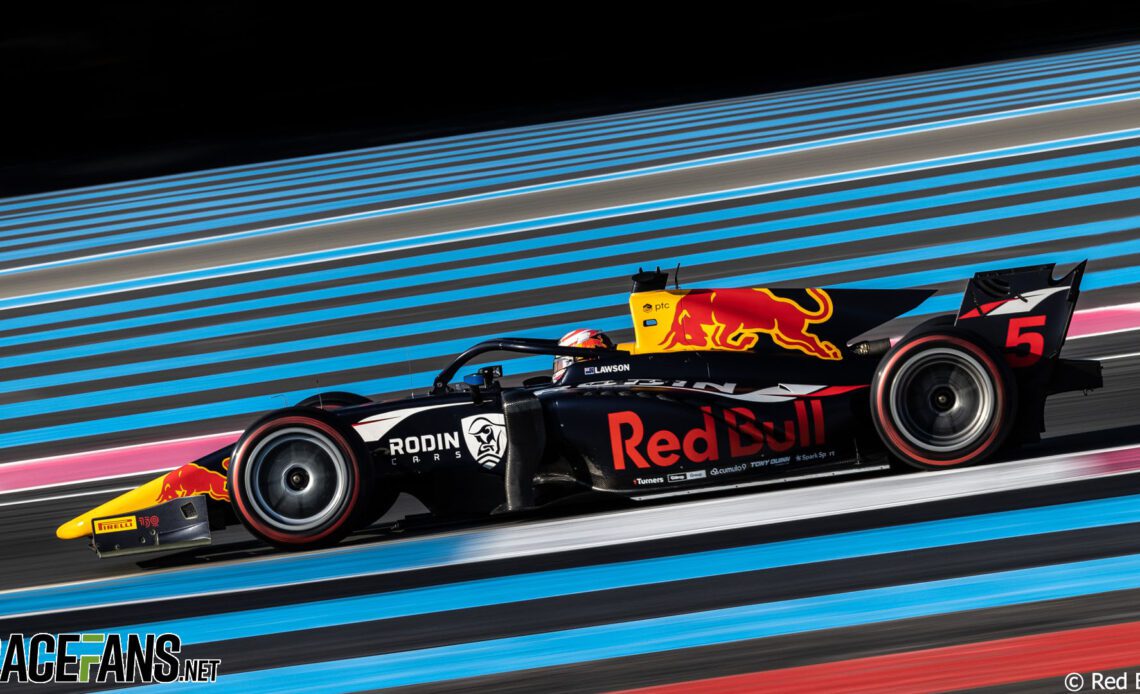 Jehan Daruvala started from partially-reversed-grid pole, Lawson alongside him on the front row and with the Hitech pair of Marcus Armstrong and Jüri Vips behind them.

Three drivers failed to get away for the formation lap, with Clement Novalak and Enzo Fittipaldi starting from the pit lane and Richard Verschoor unable to take the start. Verschoor eventually got going, but was already four laps down from the leaders.

Daruvala got a good start from pole, while Lawson in third had a terrible one. He was immediately passed by Armstrong and then nearly by Felipe Drugovich, who had started fifth. Théo Pourchaire, from sixth, also piled the pressure onto Armstrong at the front of the field.

On lap four, Lawson managed to recover his pace, taking second back from Armstrong with a side-by-side move through La Chicane. Meanwhile Daruvala was increasingly checking out in front, two seconds ahead of the rest of the field.

Enzo Fittipaldi span in La Chicane after contact with Roberto Merhi, leaving his car stranded in the middle of the pack. Amaury Cordeel collided with the stationary vehicle, sending parts of it flying into the air and prompting him to retire in the pits.

The Safety Car was deployed on lap ten, allowing the field to bunch back up. Daruvala controlled the restart, however, keeping himself ahead of Lawson with a gap that kept him out of DRS range.

Lawson chipped away at the gap, however, and by lap 16 he had reeled Daruvala in and made a pass into the chicane, almost instantly drawing out a nearly-one-second lead. There was minor contact between the two Red Bull juniors in the pass, but the race director did not consider it worthy of investigation by the stewards.

Armstrong attempted to make a DRS pass on Daruvala into La Chicane, however the two made contact and although Daruvala held on to second, Armstrong was fed back to the waiting Pourchaire behind. They narrowly avoided contact, as Pourchaire forced Armstrong wide to take third through turn 11, the incident placed under investigation.

Armstrong was forced off through the final corner again, this time by his team mate Jüri Vips and just a few corners later Ayumu Iwasa passed Armstrong for eighth, completing his demotion from a potential podium earlier in the race to outside the points on the final lap. Vips was also placed under investigation for forcing Armstrong wide.