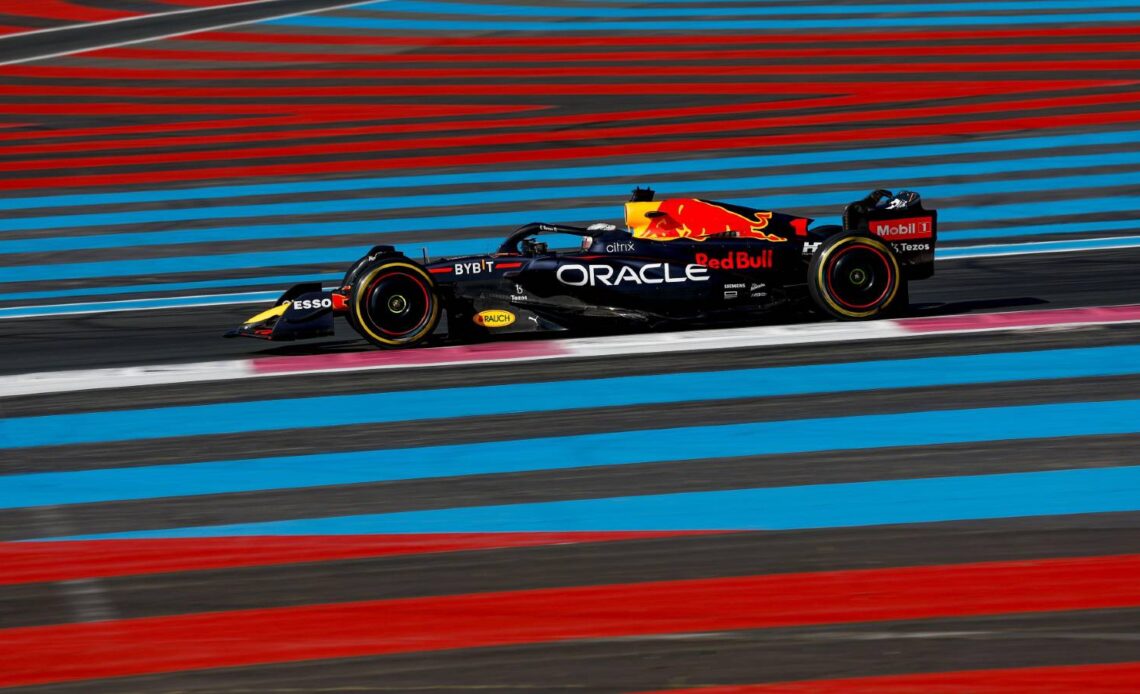 Fastest for much of the session with an early lap on medium tyres, the Dutchman was briefly knocked off top spot by Ferrari’s Carlos Sainz, who will start from the back of the grid for the race at Paul Ricard due to an engine penalty.

Charles Leclerc, winner of the Austrian Grand Prix last time out, had been second fastest to Sainz in FP2, nearly half a second ahead of Verstappen, but he could manage only third on Saturday as Verstappen established himself as favourite for pole position.

On another gloriously sunny, scorching midsummer day in southern France, Lewis Hamilton and George Russell headed out with noticeably different rear wings on their W13s, the younger of the Britons opting for a straighter design with less downforce as Mercedes strived to improve on what had been a disappointing opening day performance-wise.

Verstappen and Perez were among the first to set hot laps with the medium tyres and Hamilton’s initial effort, on the softs with his wavy ‘barn door’ rear wing, was the best part of two seconds down on his 2021 title rival – “1.7? Jeez,” was his incredulous reaction over team radio.

Sainz and Leclerc began on the soft and hard tyres respectively, their initial flying lap times a second apart, the latter then spinning at Turn 12, while his team-mate also had a brief off-road moment just as news was confirmed that the Spaniard will start on the back row of the grid due to his engine penalty – along with Haas’ Kevin Magnussen for similar reasons in another Ferrari-powered car.

Kevin Magnussen is joining Carlos Sainz on the final row of the French GP grid, the Haas driver’s VF-22 fitted with a new ICE, turbo, MGU-H and MGU-K #F1

As the session ticked down to its final third, Hamilton found some pace with a purple first sector on the way to P3, now less than half a second down on Verstappen even with a lock-up. Leclerc, now with the soft tyres, leapfrogged Sainz to go second, a tenth slower than the Red Bull.

Verstappen’s early time was still standing up as the benchmark but only until Sainz set a 1:32.626 as the Red Bulls emerged on the soft tyres for the first time in the session. As soon as he did, it was two purple sectors and a green for the World Champion to return to the top of the timesheet.

At the other end of the scale, there were more…