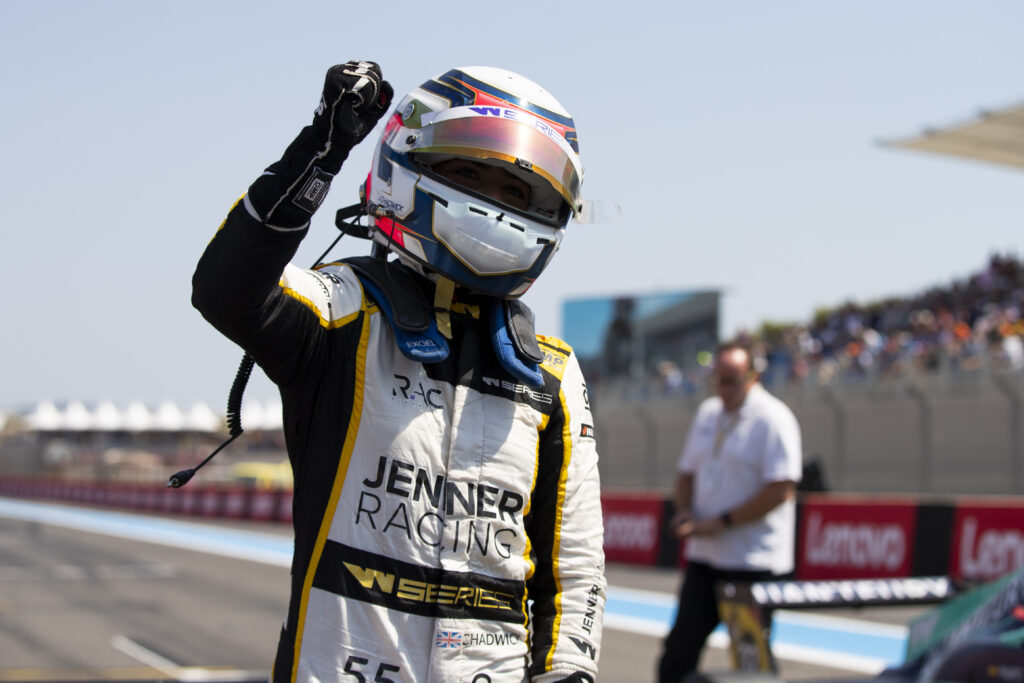 Reigning double champion Jamie Chadwick pulled off two stunning overtakes at Circuit Paul Ricard to secure her seventh straight W Series win and extend her lead at the top of the championship standings.

Starting from third on the grid having received a two-place grid penalty after qualifying on Friday, the Briton twice passed pole-sitter Beitske Visser during a dramatic race in south-eastern France which featured two safety car periods and numerous wheel-to-wheel battles.

Jamie’s fifth victory from five races so far this year – and the 11th of her W Series career – gives her a 70-point lead over nearest challenger Abbi Pulling going into the second half of the 2022 W Series season, which begins in Hungary next weekend.

Jamie finished the race in support of the Formula 1® Lenovo Grand Prix De France 2022 ahead of Spanish team-mates Belen García and Nerea Martí. Belen’s best W Series result and maiden podium finish, moves her up to fourth in the championship. That is one spot ahead of Nerea – who matched her best W Series result of third – and one behind Beitske, who moved two points behind Abbi in the standings thanks to a fourth-place finish here.

Alice Powell made up more places in Le Castellet than any driver, going from 11th on the grid to fifth. Team-mates Marta Garcia and Fabienne Wohlwend produced some scintillating racing before finishing sixth and seventh respectively. British trio Sarah Moore, Abbi, and Jessica Hawkins completed the top 10.

The track temperature was 54 degrees Celsius – 10 degrees higher than it was during Friday’s qualifying session – as the drivers lined up for the start of Saturday’s race. Nerea was slow away from second on the grid, which put Jamie straight on the tail of Beitske who started from pole position for the first time in her W Series career. The 2019 runner-up held the lead for less than three corners, as Jamie braked later on the entry to Turn 3 and completed a breath-taking move around the outside.

The safety car was deployed before the end of the first lap as the car of Abbie Eaton was stricken on the side of the start-finish straight after contact with Marta at the start. Abbie was propelled into the air after being squeezed between Marta and Belen, and the stewards deemed that there would be no further investigation.

The cars twice went through the pit-lane behind the safety car while Abbie’s car was removed. The race resumed after a six-minute delay, and…