Sainz can’t help Leclerc on race day but have Ferrari given him a tyre advantage? · RaceFans 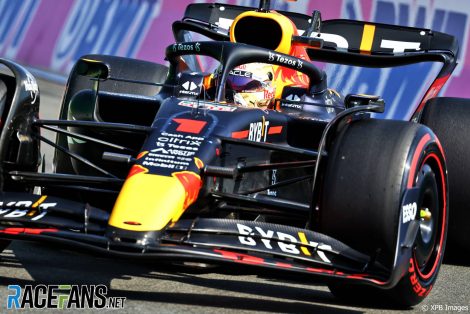 Before Ferrari had arrived in France for this weekend’s race at Paul Ricard, the team had a clear plan for how they were going to beat Red Bull and Max Verstappen in qualifying on Saturday.

With Carlos Sainz Jnr taking a fourth power unit, condemning him to the back of the grid for Sunday whatever happened, the strategy was simple: Get Sainz into Q3, then have him give Charles Leclerc a slipstream on both his flying laps to boost him ahead of Red Bull. After executing the tactic with all the precision of a Patrouille de France aerobatic manoeuvre, Ferrari’s reward was pole position for Leclerc. Just as planned.

But if Leclerc is going to prevail on Sunday, Ferrari may need be even more sharp with their strategy. Especially this final French Grand Prix at Paul Ricard could be the most challenging for teams since the venue returned to the calendar back in 2018.

Having been fastest on Friday and then again at the end of Saturday, one might assume Leclerc would be feeling confident heading into the race knowing how much stronger than Verstappen he had been in the last grand prix. However, with two Red Bulls directly behind him on the grid and no team mate nearby, Leclerc knows he’s got his work cut out.

“I think it will be tricky, because the Red Bull guys seem to be very, very quick in the race simulations they’ve done yesterday,” said Leclerc “We were good in Austria, we struggled a bit more yesterday, but I think we did a significant step up in performance since yesterday so hopefully we can show that tomorrow in the race.”

By Sainz’s own admission, this may be his best start to a weekend all season. Usually, that would make the prospect of a comeback, much as Leclerc achieved in Canada, all the more likely. But Sainz is not convinced he’ll have a simple rise through the field.

“[There’s] a lot of tailwind on the two main back straights – which is where the overtaking happens – which means the DRS effect and the tow is minimal, because the wind is pushing you,” he explained. “So it’s difficult to make it through. Also overheating with the tyres when following another car is not easy, but I will try my best.”

Red Bull may have strength in numbers at the front of the field, but Verstappen accepts that Ferrari appear to have some inherent advantages around Paul Ricard.