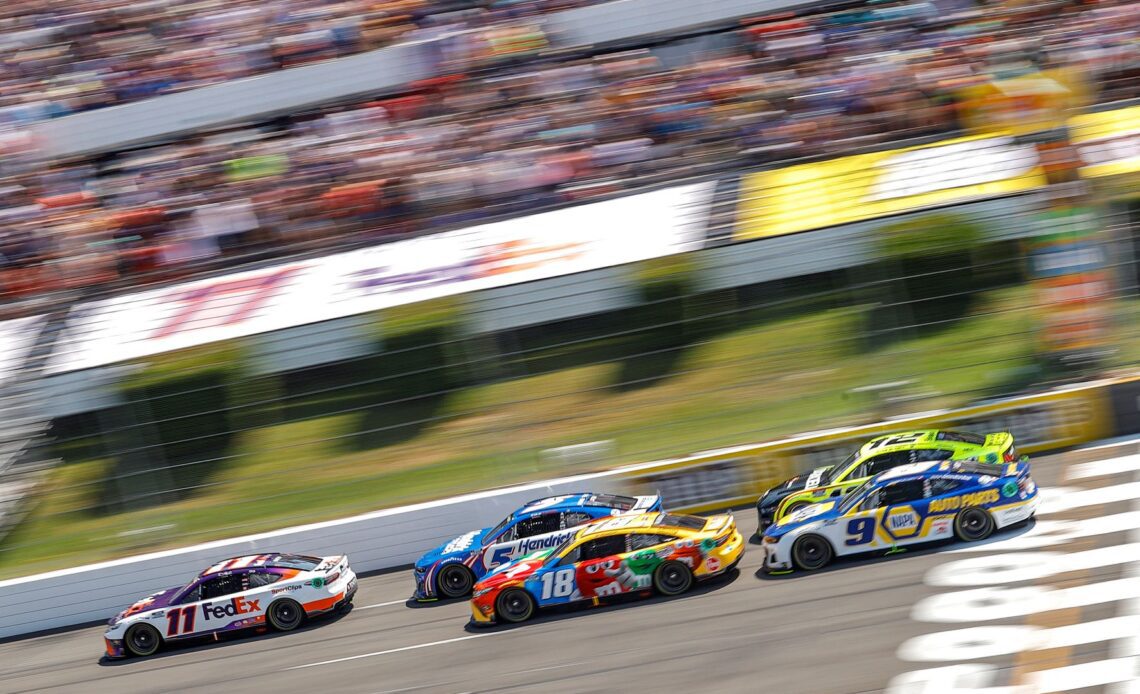 After a controversial incident involving Ross Chastain, polesitter Denny Hamlin held off teammate Kyle Busch and Chase Elliott to earn what would have been his third win of the season at Pocono Raceway on Sunday, July 24. However, both Hamlin and Kyle Busch were disqualified after the two failed post-race inspection, and Elliott was promoted into the lead, which earned him his fourth victory of 2022. Tyler Reddick, Daniel Suarez, Christopher Bell, and Kyle Larson officially rounded out the top-five finishers.

How did it happen?

Varying pit strategies cycled leaders and shuffled the field throughout the day on the Tricky Triangle. During the final stage, a fast pit stop by Chastain’s race team cycled him in front of former race leader Kyle Busch. Hamlin made his way by his Joe Gibbs Racing teammate as well for second place.

Chastain needed a green flag run to stay ahead for the remaining 20 laps in order to secure his third victory of the season, but he didn’t get the opportunity.

A crash from Ryan Blaney brought out a caution, and like that, the field was bunched up again.

Then everyone collectively realized who would be racing for the lead, and they all held their breath.

On the penultimate restart with 17 laps to go, Chastain restarted as the race leader alongside Hamlin. The duo had garnered a large amount of attention over the past month after numerous incidents between the two drivers had caused some friction between the two teams.

As a result, the two raced hard for the lead. Too hard.

CHASTAIN INTO THE WALL! pic.twitter.com/WWZmlpQYGi

The resulting caution allowed Hamlin to restart with the lead while teammate Kyle Busch accelerated alongside. Hamlin cleared Rowdy on the exit of turn 1 and stayed there for the remaining 14 laps on his way to what was almost his third win of 2022.

Hours after, however, it was announced that both Hamlin and Kyle Busch’s cars had failed post-race inspection and were disqualified. Elliott was relegated into first place and was awarded the win – his…