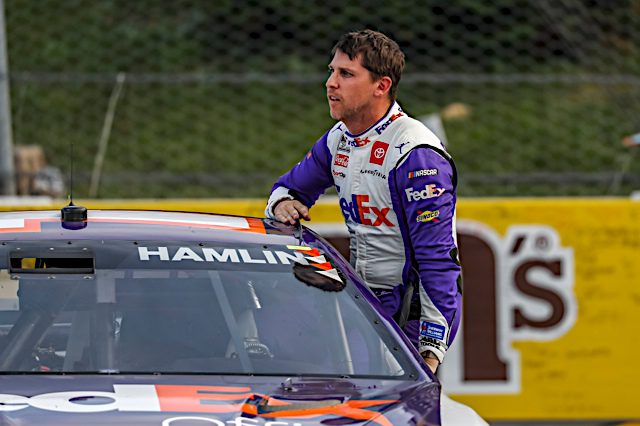 For the first time in the modern history of the NASCAR Cup Series, a win has been taken away in post-race inspection.

Over an hour after the conclusion of Sunday’s (July 24) M&Ms Fan Appreciation 400 at Pocono Raceway, NASCAR’s Brad Moran took to the stage and announced that both race winner Denny Hamlin and runner-up Kyle Busch had been disqualified due to front fascia aerodynamic infringements discovered in post-race inspection.

“There were some issues discovered [in post-race inspection] that affect aero,” said Moran, the part was the front fascia… there was no reason why there was some material somewhere it shouldn’t have been… both the [No.] 11, Denny Hamlin and the [No.] 18 of Kyle Busch have been DQ’d. Their vehicles are being loaded into the NASCAR hauler to go back to the R&D center. The final results have been changed.”

Third-place finisher Chase Elliott has been credited with the race victory and Kyle Busch’s stage two win has been retroactively awarded to Ross Chastain, who tangled with Hamlin late in the running.

It is Elliott’s fourth win of the season and fifth consecutive top-two finish.