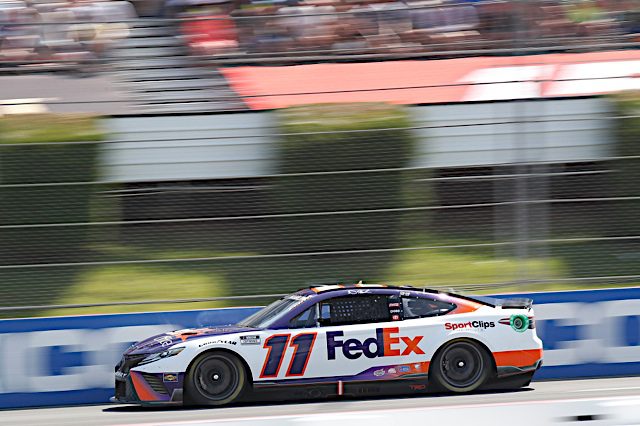 He might have started from the pole, but Sunday’s (July 24) M&Ms Fan Appreciation 400 at Pocono Raceway wasn’t an easy win for Denny Hamlin. After hitting the wall on the first lap, spinning out in stage two and not knowing if he’d have enough Sunoco fuel to make it to the end, Hamlin made the right moves at the right time to win his third race of 2022, the 49th of his career and a record-setting seventh at Pocono.

Strong strategy calls from crew chief Chris Gabehart brought Hamlin back towards the front with 30 or so laps remaining. Except the one man standing between Hamlin at the checkered flag was Trackhouse Racing Team’s Ross Chastain.

With these two, it was only a matter of time.

On a lap 143 restart, Hamlin drove deep into turn 1, making contact and sending the No. 1 out of the groove and into the wall. As Kyle Petty said, Hamlin gave Chastain “just enough racetrack to wreck [him]self,” and the No. 1 Chevy did exactly that, bouncing off the wall and into the path of an innocent Kevin Harvick.

CHASTAIN INTO THE WALL! pic.twitter.com/WWZmlpQYGi

Chastain would fail to finish, and Hamlin would lead the rest of the way home.

Making his Cup Series debut as a replacement for an injured Kurt Busch, 19-year-old Ty Gibbs cracked the top 15 late in the running but faded to a still-impressive 18th.

Hamlin’s day began when he took the green flag and immediately scraped the wall on the exit of turn 1, handing the lead to second-place starter Kyle Busch. On a restart 12 laps later, Busch got way up the track in the very same turn, opening the door for Larson to make a three-wide pass for the lead, a lead he refused to relinquish the rest of the stage.

Turn 3 was the trouble spot all weekend and it started just seven laps in. Austin Cindric spun his Team Penske Ford into the inside wall. While the No. 2 looked unharmed, two flat tires and a 2.5-mile tow truck ride tore up the aerodynamic underbody of the Keystone Light Mustang.