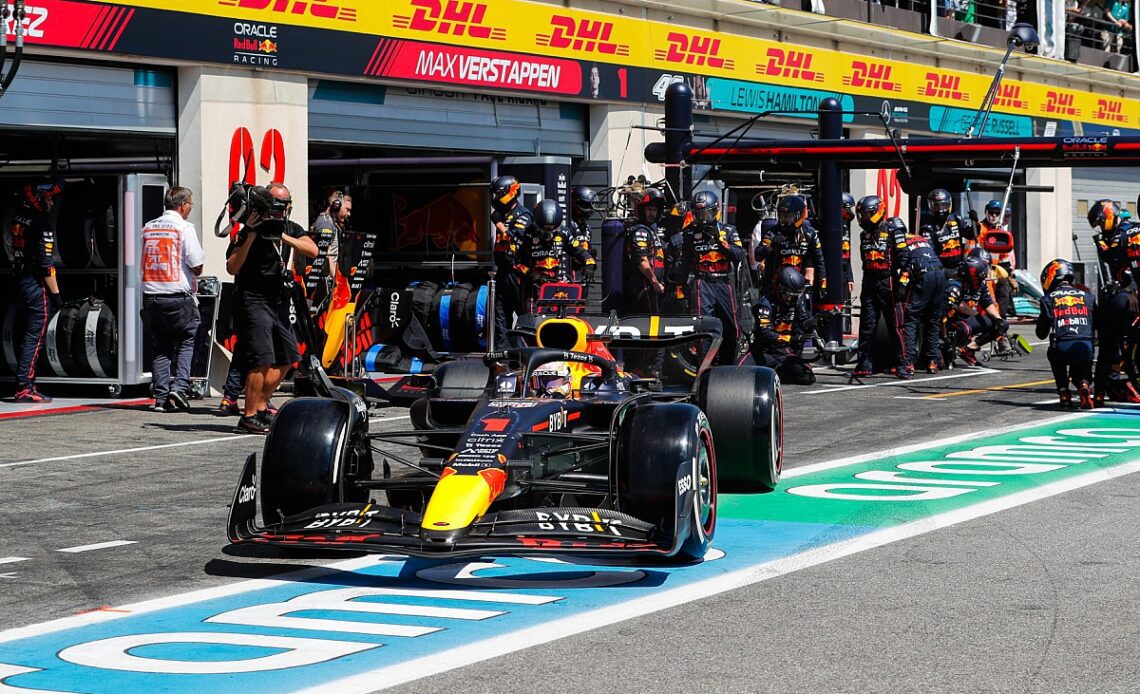 Verstappen cruised to victory after Leclerc crashed out at the double-apexed Le Beausset corner, and he finished over 10-seconds clear of the Mercedes of Lewis Hamilton – starting his 300th grand prix – and George Russell.

How the French Grand Prix unfolded

Leclerc held his pole advantage on the run to Turn 1, leading Verstappen, Hamilton, Sergio Perez (Red Bull) and a fast-starting Fernando Alonso (Alpine). The latter’s teammate Esteban Ocon bumped Yuki Tsunoda’s AlphaTauri into a spin at the North Chicane on the opening lap, for which he got a 5s time penalty.

Verstappen got into Leclerc’s DRS range by the start of Lap 4 and hounded him for the lead from Lap 6. After getting close but being unable to get past at Le Beausset, Verstappen stopped attacking and reverted to stalking his title rival.

Verstappen blinked first and pitted at the end of Lap 16 but Leclerc didn’t respond and stayed out. That became immaterial when he lost control of the rear of his car, spun and crashed into the tyrewall two laps later at Le Beausset, causing a safety car.

Verstappen picked up the lead, ahead of Hamilton, Perez, Russell and Alonso – who all pitted under the safety car. From his back-of-the-grid start, Sainz was quickly up to sixth after the restart, this despite a woefully-slow pitstop and being released into the path of a Williams – for which he received a 5s time penalty.

Sainz passed Russell for fourth around the outside of Signes on Lap 31, while Hamilton ran wide at Turn 2 and was now over 6s behind Verstappen, who was cruising out front.

Sainz passed Perez for third with a great lunge at the final corner, just as Ferrari told him to pit. Perez then came under attack from Russell, the pair clashing at the North Chicane causing Perez to go straight on. Stewards decided it was a racing incident, despite Russell’s complaints to the contrary.

Sainz pitted from third with 10 laps to go, dropping him to ninth. On fresh mediums, he quickly stormed up to fifth setting a string of fastest laps.

A late-race virtual safety car for Zhou Guanyu’s stranded Alfa Romeo allowed Russell to get the jump on Perez and he grabbed third place with three laps to go.

Behind Sainz, Alonso finished sixth from McLaren’s Lando Norris. Ocon passed Daniel Ricciardo (McLaren) around the outside of Signes in the closing stages to finish eighth. Lance Stroll scored the final point for Aston Martin, just ahead of teammate