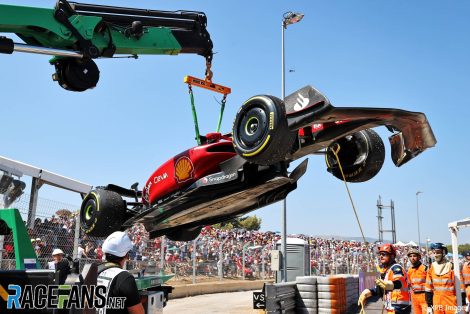 Ferrari team principal Mattia Binotto is sure the team made the correct decision to pit Carlos Sainz Jnr in the closing stages of the French Grand Prix, even though he had just moved into third place.

Sainz had risen from 19th on the grid to pass Sergio Perez for third place by the 41st lap of 53. He had a five-second time penalty to serve after he was unsafely released in front of Alexander Albon’s Williams during his pit stop.

That, and concern over the life of his medium compound tyres, led Ferrari to bring him in for a second pit stop, Binotto explained. Radio messages between Sainz and Ferrari indicated some indecision over whether or not to pit. Sainz later said “I don’t understand why we boxed, we would have pulled away”.

However Binotto was certain the team made the right call. “The choice we made was the proper and the right one,” he told RaceFans and other media after the race.

“I think that Carlos from the cockpit, from the heat, does not have all the information so for him was difficult to judge. But no doubt that I think we made the right choice.

“At first we were trying to extend the stint as much as possible to have the best freedom, the tyre life, to make sure we are not overshooting any decisions in terms of tyre life.

“As soon as we got all the information which were required, we realised that there was not sufficient tyre life to go to the end of the race. As simple as that. To stay out would have been risk in terms of safety and reliability in terms of tyre life. So we had to stop.

“More than that I think that the pace of Carlos would not have been sufficient to open the gap more than five seconds to Perez and Russell to cover the five-second penalty. So it was important, it was right to stop.

“By doing that we had the fastest lap of the race, which still was a point, important points for the team and for Carlos. So once again, I think what we did was a good choice, waiting the right moment, having all the data and making the proper [call].”

The pit stop dropped Sainz to eighth place. He worked his way back up to fifth, but his progress was delayed when a Virtual Safety Car period was triggered.

After the race he said he will “have to trust the numbers” were correct in showing that staying out was the wrong thing to do.