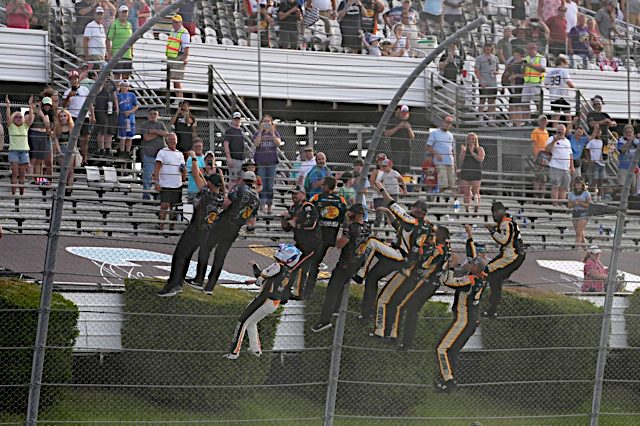 Noah Gragson took home his third win of the season yesterday as he crossed the finish line less than half a second ahead of Ty Gibbs at Pocono Raceway in the Explore the Pocono Mountains 225.

Josh Berry, AJ Allmendinger and Sheldon Creed rounded out the rest of the top five, while Justin Allgaier and Gragson took the points in the first two stages.

In the closing laps Gibbs, on old tires, tried to make a late-race run on Gragson, who was on much fresher tires on all four corners. Gibbs got door-to-door with the eventual winner, but eventually was forced to relent the position and give Gragson the win. A less-seasoned Gibbs might have turned Gragson, but in his first full year in Xfinity it’s apparent that the budding superstar has learned a lot.

Plenty of storylines grew during the 90-lap fiasco, but there were also just as many that flew under the radar.

First of all, Chevrolet. It’s no secret that they run the Xfinity Series, with the flagship JRM team sporting nothing but Camaros. However, it took them and plenty of others to place eight cars inside the top 10, including the race winner. So far on the year, Chevy has totaled 13 wins – more than twice that of Ford and Toyota combined. If that isn’t dominance, then I don’t know what is.

The final spot on today’s Winners list goes to Jeb Burton, for walking away from this horrendous crash unscathed.

Five cars were involved in the incident as Santonio Ferruci slammed into Ricky Stenhouse Jr., whose sliding Chevy then found Burton, flipping him on his roof and causing a slide that felt like it went on for an eternity.

You never want to see a situation in which a drivers needs the safety crew promptly, but thankfully, they did a phenomenal job in making sure Burton was safe and cleaning up the wreckage. Here’s to you Pocono safety crew – thank you.

Rajah Caruth is one of the best up and comers in the sport. He’s showcased his talents as a wheelman in ARCA this season and while he may not yet have a win, is currently the points leader for the regular season. Yesterday, however, Caruth’s outing in the Xfinity ride didn’t go as planned.

A huge hit early at Pocono.

Alex Labbe and Rajah Caruth were cleared from the infield care center after this crash. #NASCAR

Caruth was trying to clear behind Alex Labbe and…