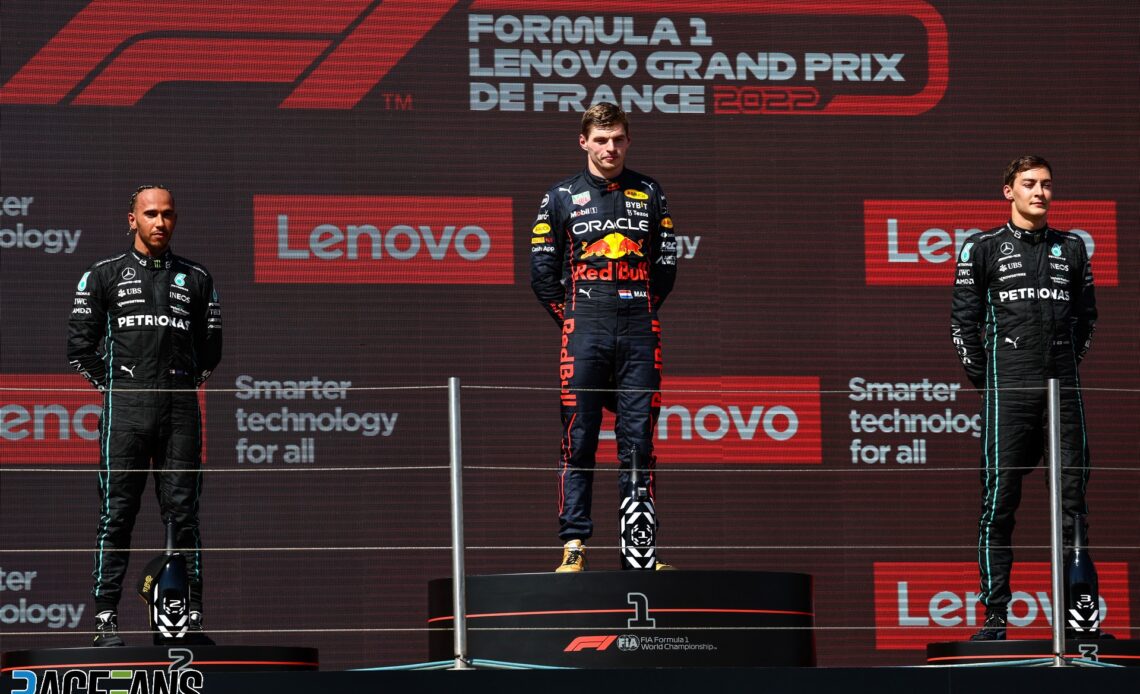 “I’m gutted for Charles, who’s been doing a great job, as has Carlos,” said Hamilton following Leclerc’s crash during yesterday’s race. “It’s not easy though, having that pace and that performance and maintaining it.

“It’s a tough job and I feel for the whole team because I know what that can feel like. But they’re a great team, and they’ll continue to keep their heads down.”

Verstappen now leads Leclerc by 63 points in the championship. Hamilton said it was a “massive gap” at this stage in the season. “So that’s pretty smooth sailing in that space, generally.

“But a lot still can go wrong up ahead so I would just advise them just to continue to push.”

Norris says he cannot use water bottles during races

Lando Norris said that he cannot use a drinks bottle during hot races or he would be sick.

“I still don’t use a water bottle inside,” said Norris after the French Grand Prix, which was run in punishingly high temperatures. “[It] makes me feel too sick, so I can’t use it.

“I just can’t do too many fluids when I drive otherwise I’d just barf it back up.”

Although Norris said this has never actually happened to him, “I just know it will, so that’s why I avoid it.”

Jamie Chadwick, who has a 70-point lead in the W Series championship, says she was considering a move to Indy Lights if she could not secure a Formula 3 or Formula 2 drive for 2023.

“My goal is always to keep progressing,” Chadwick said. “I really want the step up. I know I need to perform still this year but I’ve still got one eye one eye on the future as well.

“Any feeder series is the goal, so Formula 3, Formula 2 but also I’m actually looking at America opportunities and potentially Indy Lights as well. So I’m just exploring all options.

“I think we’ve got a nice big break after Budapest so there’d be some time to really understand what we’re capable of and what the best opportunity is.”