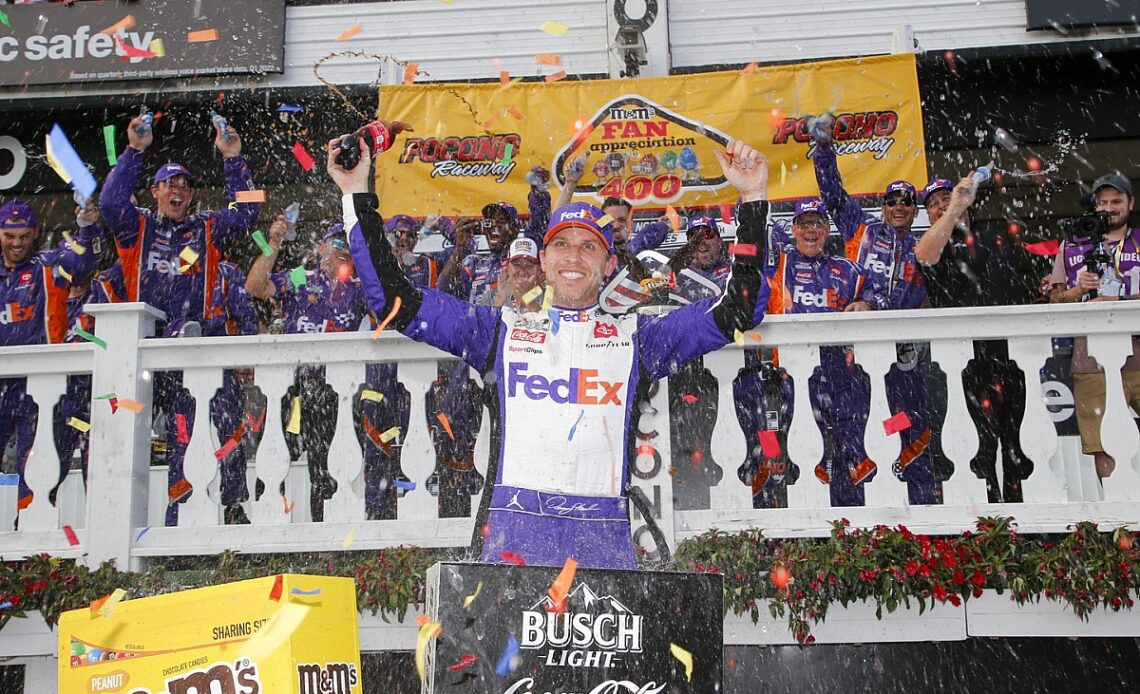 Hamlin started Sunday’s race at Pocono Raceway on the pole and tagged the wall on the first lap. His march to victory remained eventful throughout all 160 laps.

He spun off Turn 2 on Lap 41 to bring out a caution and on a restart on Lap 143, Hamlin ran Ross Chastain up the track and into the wall in a battle to take the lead.

From there, Hamlin was able to hold off his Joe Gibbs Racing teammate, Kyle Busch, by 0.927 seconds – while also trying to save fuel – to earn his third win of the 2022 season and seventh at Pocono.

The victory is also the 49th of his career, which leaves him tied with NASCAR Hall of Famer Tony Stewart.

“It was the team. They had a great strategy there to get us back up front from a mistake I made,” Hamlin said.

Chastain and Hamlin have had multiple run-ins on the track this season with Hamlin promising payback was coming at a moment of his choosing.

“We’re going to just keep racing hard until we get the respect back from these guys. We’ve been wrecked four times – twice while leading – in the last 10 months and I’m just at the end of it.”

Hamlin said he never believed he would have such a successful NASCAR career.

“I just wanted to be a local short track racer in Virginia. That’s all I really cared about,” he said. “I was able to get a great break from J.D. Gibbs and that’s why I’m driving the No. 11 for Joe Gibbs Racing.”

Chase Elliott ended up third, Tyler Reddick was fourth and Daniel Suarez rounded out the top-five.

Xfinity Series regular Ty Gibbs finished 18th in his Cup Series debut. He replaced Kurt Busch on Sunday morning. Busch missed the race due to lingering effects from a concussion suffered in wreck Saturday during qualifying.

During the break between Stages 2 and 3, only a handful of cars elected to pit. Kyle Busch remained on the track and in the lead when the race returned to green on Lap 101.

Ryan Blaney suffered a flat left-rear tire on Lap 108 and tagged the wall but no caution was called and he made it to pit road.

With 50 laps remaining, Chastain had closed to within half-a-second on Busch for the lead as Hamlin ran third.

On Lap 117, Chris Buescher kicked off a final round of green-flag pit…