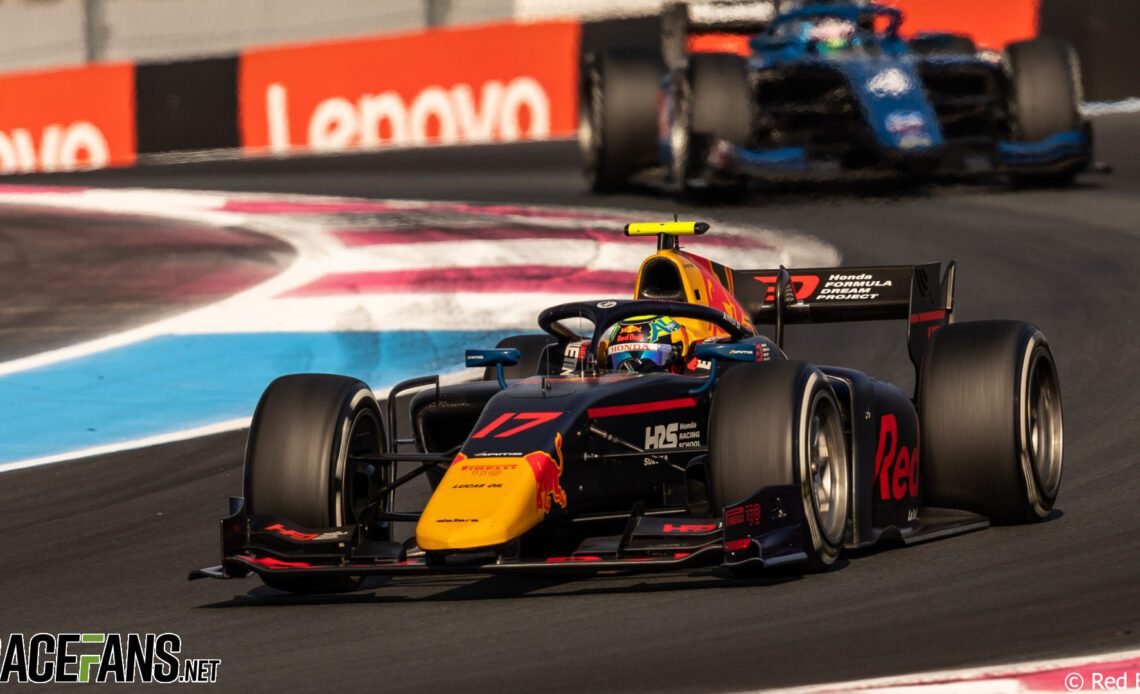 Ayumu Iwasa won the Formula 2 feature race at Le Castellet, his first Sunday victory in the series and a home win for his Dams team.

Logan Sargeant had taken pole by just a few thousandths from Iwasa, with Jack Doohan and Frederick Vesti starting on the row behind them.

Sargeant got a terrible start, while Doohan roared into the lead, demoting Sargeant to third while Théo Pourchaire and Frederick Vesti battled with each other.

Iwasa took the lead of the race up the straight towards turns eight and nine, confidently out-braking Doohan into the chicane. However, a Safety Car was called for Marino Sato’s car being stopped on track at turn eight.

Sato was not the only incident, after David Beckmann and Marcus Armstrong had collided exiting turn 11, hitting Dennis Hauger’s car in the process. Armstrong’s torrid weekend came to an early end as he pulled over to the side of the track, race over, while Hauger had to pit for a new front wing.

The Safety Car came in at the end of lap five and Iwasa took an early restart, holding his lead and drawing it out to a second within the first few corners.

Roy Nissany was issued a five second time penalty for leaving the track and gaining an advantage while battling with Jehan Daruvala, who had eventually passed Nissany around the outside of Signes.

Logan Sargeant came into the pits on lap 13, however, a fault developed on his car during the stop, leaving him with a running engine but no drive and smoking brakes in the Carlin pit box. Sargeant was left with no option but to climb out of his car and retire, visibly frustrated.

Doohan pitted the following lap, emerging just ahead of Pourchaire. Pourchaire had warmer tyres, having pitted earlier, and he cleanly overtook the Virtuosi driver for what was net second on track, It proved the undoing of Doohan, who spun at the chicane and lost third to Vesti, although able to continue.

Iwasa came in on lap 14 for a smooth stop and his race was straightforward from that point, pulling out an enormous lead to cross the line more than eight seconds ahead.

On the final lap, Richard Verschoor reported “something on fire” on his car, forcing him to pull over on the pit straight, securing Iwasa’s lead even further.