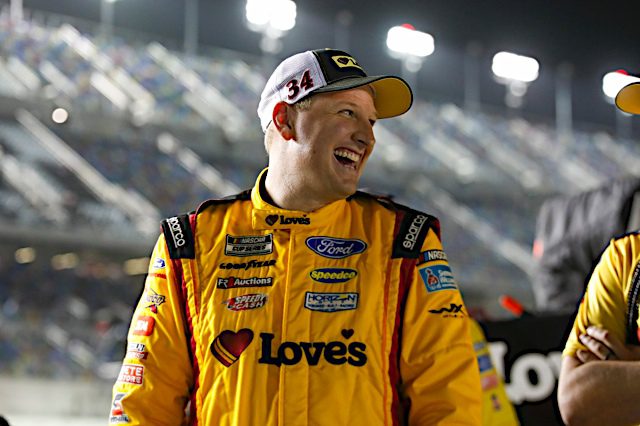 Starting 25th, McDowell steadily climbed through the field in his Fr8Auction.com Ford throughout the 160-lap race.  His No. 34 crew, led by crew chief Blake Harris, had clean pit stops and made the right adjustments as the race moved forward.

By the time stage one wrapped up under caution, McDowell had crept his way inside the top 15, running 12th before stalling out.  With numerous pit strategies playing out during stage two, the team maintained their speed but gave up a little bit of track position. By the end of stage two, McDowell and his No. 34 sat 19th.

But a call from the pit box during the final stage is what ultimately worked in McDowell’s favor. When Ryan Blaney spun to bring out the caution on lap 137, the No. 34 team opted to stay out for track position, moving up to 14th on the ensuing restart. This move paid immediate dividends, McDowell dodging the incident involving Ross Chastain and Kevin Harvick while gaining five spots to ninth.

That is where he would be on the final restart with 13 laps to go.  McDowell would make his way as high as seventh until giving up a spot to Kyle Larson late to cross the line in eighth position. However, McDowell would later be bumped up to sixth after the top two cars, driven by Denny Hamlin and Kyle Busch, were disqualified during post-race inspection.

Pocono continues what has been a standout season for McDowell. He now has eight top-10 finishes in 2022, the most the Daytona 500 winner has ever had in a Cup Series season, with 15 races still to go.  His previous high of five top 10s was set just last year.

In addition to being the top underdog this week, McDowell also showed the way for the blue oval crowd by being the only Ford driver to finish inside the top 10.

For most of the race, it looked as if Erik Jones would take home the title of top dog at the Tricky Triangle.

The No. 43 Focus Factor Ford had speed right off the hauler at Pocono, posting the sixth-fastest lap in practice. However, a poor qualifying effort in 34th took some of the wind out of the No. 43 team’s sails. To add insult to injury, both Petty GMS…