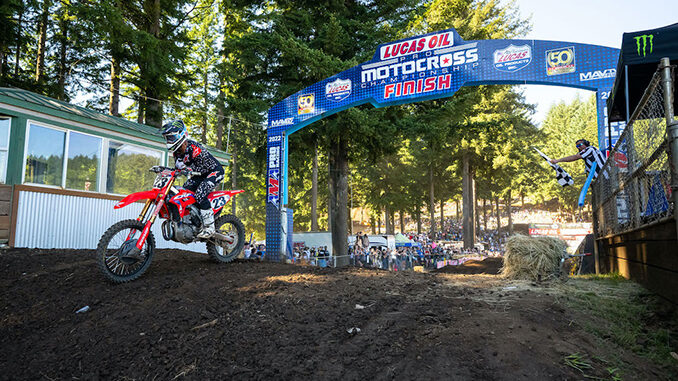 WASHOUGAL, WA – July 24, 2022 – (Motor Sports NewsWire) – The Lucas Oil Pro Motocross Championship, sanctioned by AMA Pro Racing, made its return to the West Coast for Round 8 of the 50th anniversary season with its annual visit to the Pacific Northwest. The scenic surroundings of Washougal MX Park featured perfect temperatures and mostly cloudy skies at the MotoSport.com Washougal National, presented by Peterson CAT, where the highly technical track layout resulted in an exciting battle for victory across both divisions. In the 450 Class the season’s two elite combatants went head-to-head throughout the afternoon as Team Honda HRC’s Chase Sexton edged out Monster Energy Star Yamaha Racing’s Eli Tomac via tiebreaker for his second victory of the season. The 250 Class saw an equally captivating battle in which Team Honda HRC rider and championship point leader Jett Lawrence relied on consistency to secure his seventh win of the summer campaign.

The opening 450 Class moto began with Red Bull KTM Factory Racing’s Ryan Dungey and Sexton side-by-side exiting the first turn, where Dungey emerged with the MotoSport.com Holeshot. Sexton was able to solidify a hold of the lead in the next turn and looked to sprint away as Dungey then battled with Tomac for second.

Dungey continued his pursuit of the lead but suddenly experienced an issue with his KTM that ultimately ended his moto. That misfortune allowed Tomac to assume second and give pursuit to Sexton, while Team Honda HRC’s Ken Roczen took over third, nearly 10 seconds behind the leaders.

As the moto passed the 10 minute mark the battle for the lead was on. Tomac appeared to have the faster pace, but found difficulty in trying to complete a pass. The Yamaha rider continued to keep the pressure on his Honda rival and made his way by with a savvy move just before the halfway point. Once out front, Tomac quickly built a multi-second advantage over Sexton.

The closing 10 minutes saw Sexton claw his way back into the fight as he lowered the deficit to less than a second. Behind them, Monster Energy Kawasaki’s Jason Anderson closed in on Roczen for a battle for third. Back out front, Tomac and Sexton reignited their battle for the final five minutes.