Verstappen dominates after Leclerc crashes out of lead 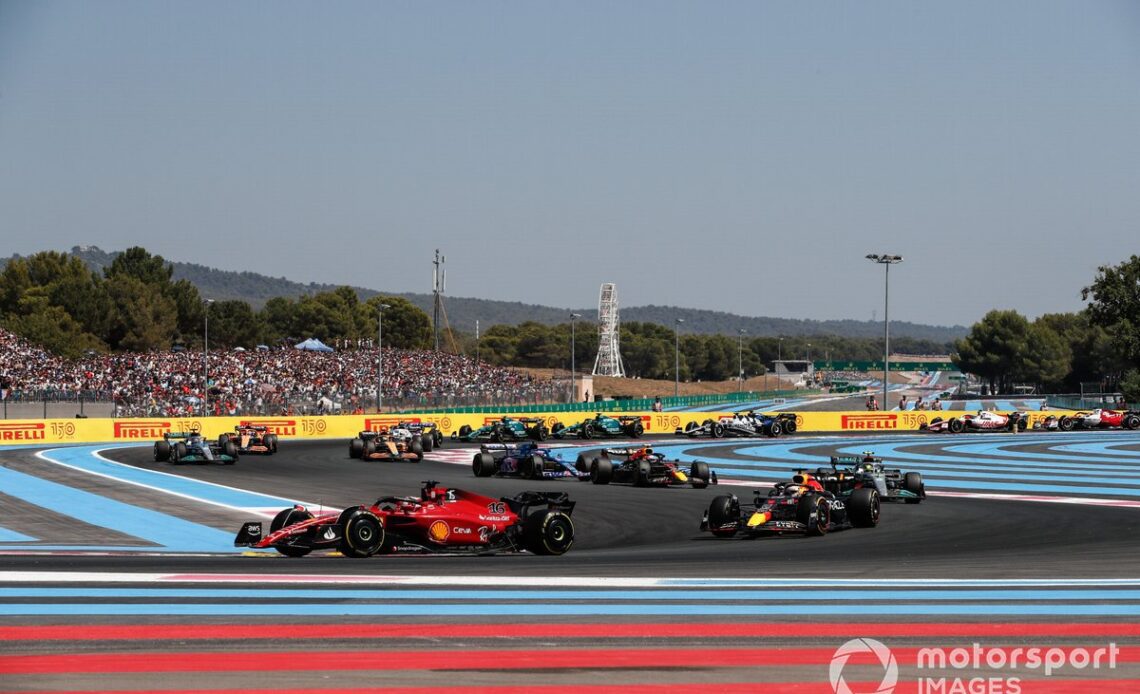 At the start, Leclerc easily lead away from pole ahead of Verstappen, who initially looked like he would have to defend against Hamilton into Turn 1 as the Mercedes driver had launched straight past Sergio Perez up ahead and starting third.

But Verstappen hit the brakes latest of the top three and ran to Leclerc’s outside, but the Ferrari was under no real pressure on the racing line.

The top 10 immediately pulled clear of Hamilton – exchanging fastest laps as they did so.

As soon as DRS was activated on lap three, Verstappen – who was already able to catch Leclerc on every straight with his lower drag, skinnier rear wing – really began to pressure his rival, who appeared to be struggling for rear tyre grip.

Verstappen closed the gap to a minimum of 0.5s at the start of lap eight of 53 as he twice got so close running into Le Beausset he looked to attack on Leclerc’s outside.

But the Ferrari’s higher downforce, larger rear wing meant Leclerc was able to pull away through the technical sections at the start and end of the laps and a tense stalemate developed with Verstappen falling back towards one-second adrift over the next few laps.

The Dutchman was now the one seemingly struggling for grip as at one stage he slipped off the road at Turn 6, so picking up his first track limits violation, and by lap 14 he had had fallen out of DRS range as Leclerc began to increase his pace back towards where he had been lapping in the early stages.

Leclerc’s lead was heading up towards 1.5s when Red Bull called Verstappen in at the end of lap 16 to switch to the hard tyres.

Ferrari, which had told Leclerc it was considering a “Plan B” strategy and that the harder tyres team-mate Carlos Sainz was running down the order after his engine-change grid penalty were still suffering from thermal degradation, did not move to immediately cover Verstappen’s stop.

But just after it had warned Leclerc to look after his mediums, the race was turned on its head when Leclerc crashed out at Le Beausset – losing the rear of his F1-75 in a mistake while running close to the edge of the track deep into the high-speed hairpin on his stressed rubber.

He rapidly spun around and went straight on into the barriers, where he fumed “I cannot go on throttle”…