Verstappen grabs win after Leclerc crashes out of the lead · RaceFans 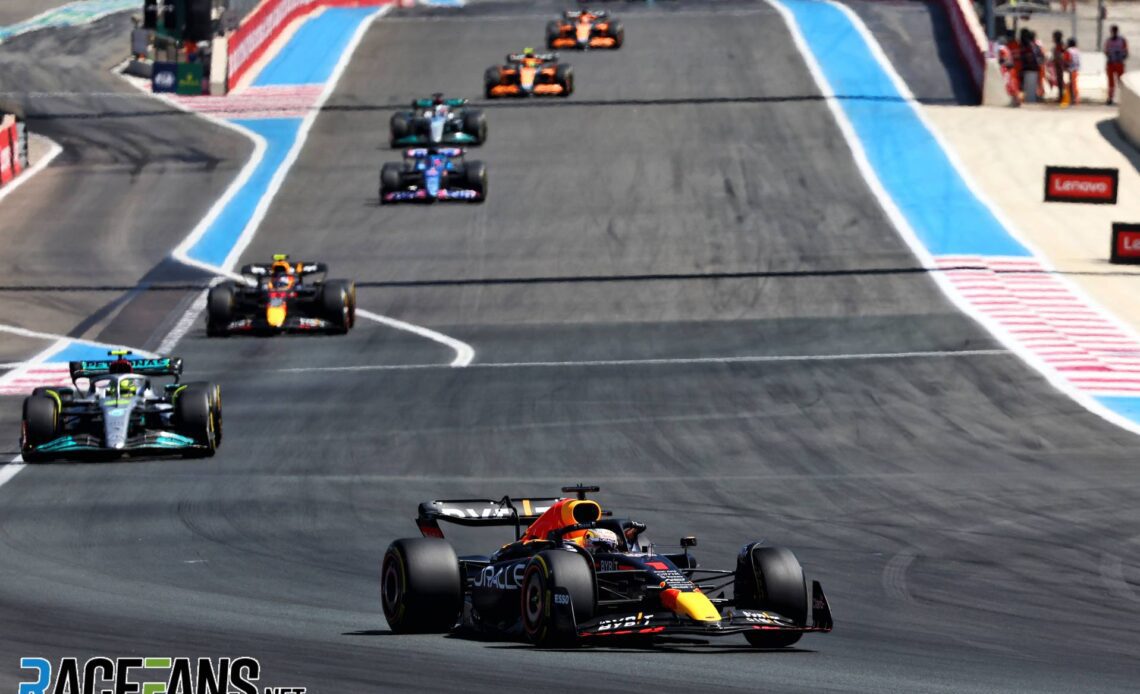 Max Verstappen won the French Grand Prix at Paul Ricard after Charles Leclerc spun out and crashed while leading the race.

The two front row starters battled in the opening stint of the race, Leclerc holding off Verstappen. However, Leclerc spun at the Beusset right-hander and crashed out of the race, handing the lead to Verstappen, which he never relinquished.

Conditions were perfect as the field lined up on the grid for what appears to be the final French Grand Prix for the foreseeable future. When the lights went out, Leclerc and Verstappen made similarly good starts, Leclerc holding the lead through the first corner.

Behind, Hamilton jumped ahead of Perez into third place, while Lando Norris fell behind both Fernando Alonso and George Russell to seventh.

Back in the pack, Esteban Ocon and Yuki Tsunoda made contact in the chicane on the Mistral Straight, sending the AlphaTauri into a spin and dropping him to the read of the field. Having started from the back of the grid, Kevin Magnussen gained seven places to jump up to 13th by the end of the first lap.

Leclerc led out front while both he and Verstappen quickly dropped Hamilton and the rest of the pack behind them. When DRS was activated on the third lap, Verstappen used the overtaking aid to stick close to the Ferrari driver, but was unable to get enough of a slipstream to have a look at the lead.

On lap six, Leclerc made a slight mistake in the chicane and allowed Verstappen to get a run on the approach to Signes. Verstappen followed closely and tried to make a move around the outside of Beausset, but Sainz held his line and kept the lead of the race.

After his attack was repelled, Verstappen backed off from the rear of the Ferrari. He fell to around two seconds off the leader before Red Bull called him into the pits at the end of lap 16. After fitting a set of hard tyres, he rejoined in seventh place behind Norris, but quickly overtook the McLaren.

On lap 17, Leclerc suddenly lost control of his car through Beausset and spun into the tyre wall, reporting a stuck throttle on his car. He later confirmed the error and been his, which explained he deep scream of frustration on the radio before he climbed out of his car.

The Safety Car was deployed, prompting a flurry of activity in the pit lane. Hamilton and Perez both…