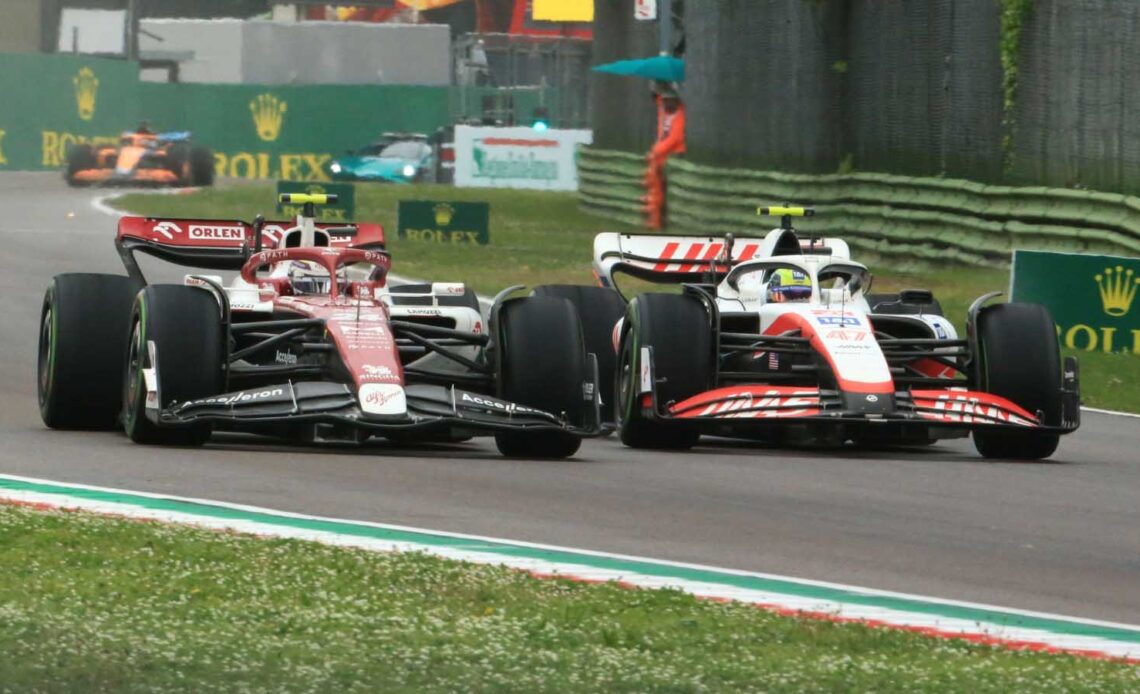 Mick Schumacher and Zhou Guanyu were not in agreement over who was at fault for their collision during the French Grand Prix.

The two came together after the Safety Car period caused by Charles Leclerc ended, Schumacher sent spinning as a result.

He recovered to finish P15 but it was a disappointing race for Schumacher who was unable to extend his streak of consecutive point finishes.

The FIA found that Zhou lost control of the rear of the car when Schumacher was on the outside and made contact with the Haas driver, causing him to spin. They adjudged the Alfa Romeo man to be fully at fault and handed him a five-second penalty as well as two points on his superlicense.

Despite this, Zhou felt it was more a case of him defending and said the crash compromised both of their races.

“From my side, you know, I defended the inside in turn 11,” he told F1.com. “He was trying to go on [the] outside and at one point the corner radius became very small for me. So I tried to keep tidy, but I think it’s difficult to judge for both of us and it kind of compromised both of our races. So unfortunately, that happens. So we just move forward.”

Zhou’s day only got worse from there as he was forced to retire on Lap 49 with a technical issue. The Chinese driver said they were “still investigating” the cause of the problem.

😪 five seconds penalty for Zhou after a collision with Mick Schumacher. Car #24 is is P18 and one of the quickest cars on track at the moment, but this won’t help. #FrenchGP

“It was actually coming maybe 50 laps to the end,” Zhou said. “They did some switch changes to make sure [I was] not losing so much power so we have to investigate obviously, [I] just came back from the race car so, apart for that, obviously the race just never went our way. [I] was struggling all the way through so not a day to remember.”

Schumacher raised the point of Zhou’s ongoing issue and described it as “unnecessary” of him to drive as he did.

“I think he had an issue and it was unnecessary for him to kind of stick into that inside,” Schumacher told F1.com. “I haven’t seen it from the outside so I’ll probably come back to that later.

“We had a difficult start on the medium, the tyre just didn’t really work as well as we imagined. Obviously we knew it was going to be tough but not as tough.

“So, we came in early, unfortunately there was a Safety Car which meant for a…