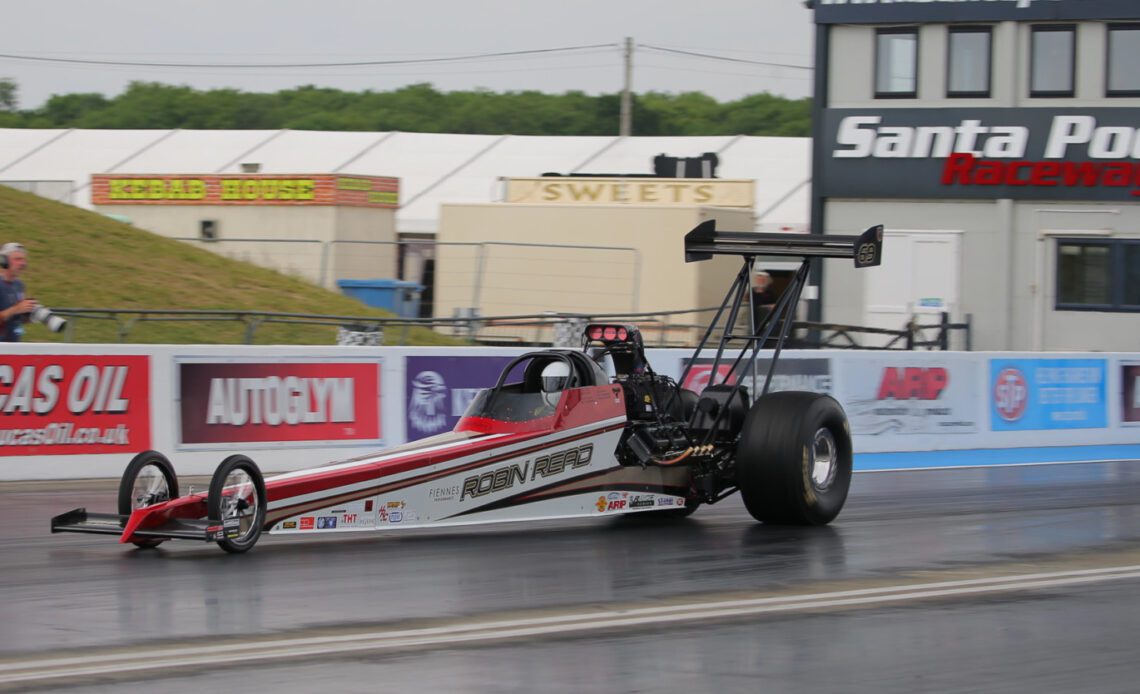 The sport of drag racing has grown to have international appeal, and today you’ll find a wide variety of cars contesting the 1/4-mile around the globe. One of the more unusual —and amazing— examples of diversity and innovation is the Daimler-powered dragster of England’s Robin Read. He’s cranked out a best of 6.37-seconds and a speed of almost 210 mph at the renowned Santa Pod Raceway in Northamptonshire, United Kingdom. And that’s with only 153 cubic inches.

Read’s current 250-inch wheelbase dragster is the epitome of resourcefulness, as the car is run on a tight budget. The chassis was built by Wayne Allman of the Intergalactic Custom Shop in 2020 to SFI Spec 2.5C (good for e.t’s over 5.90), with Robin and Brian Thomas building the body.

Credit Boghos Nahoualakian for the upholstery and Denis Lowry the wiring.

Here’s Robin Read and his Daimler SP250 sports car with its “bonnet” open to reveal the little 2.5L Hemi V8 that’s the basis of the power in his unique fueler.

This is the fourth in a series of diggers raced by Robin —the first being a front-engined Volvo-powered car built in 1974. At the time, it was purported to be the world’s quickest and fastest naturally aspirated four-cylinder gas-burning drag vehicle and credited with a best performances of 10.70s, in the high 130 mile-per-hour range. After Robin sold the car it won three European championships in Comp Eliminator.

Power to the ground comes via a 3-disc clutch fabricated by Bertie Hopkinson, Robin’s right hand man, housed in a Boninfante titanium can, through a Lenco C4 transmission and a Strange modular aluminum rearend.

Power for Read’s “Spirit of Le Patron” (so-named as a tribute to his late father, Jim, who raced a Pro Comp car named “Le Patron”) comes from the unique Daimler SP250 sports car. Built between 1959-64 by Daimler Motor Company Ltd. of Coventry, England (not affiliated with Daimler-Benz), the SP250 has a 2.5L V-8 engine that does resemble a scaled-down early Chrysler Hemi. It has a similar cylinder head with hemispherical combustion chambers and dual rocker shaft design, but the cam uses motorcycle-type lifters. It was originally designed by Edward Turner, who is best known for his Triumph and Arial…