Mercedes reveal when their development focus shifts to the 2023 car 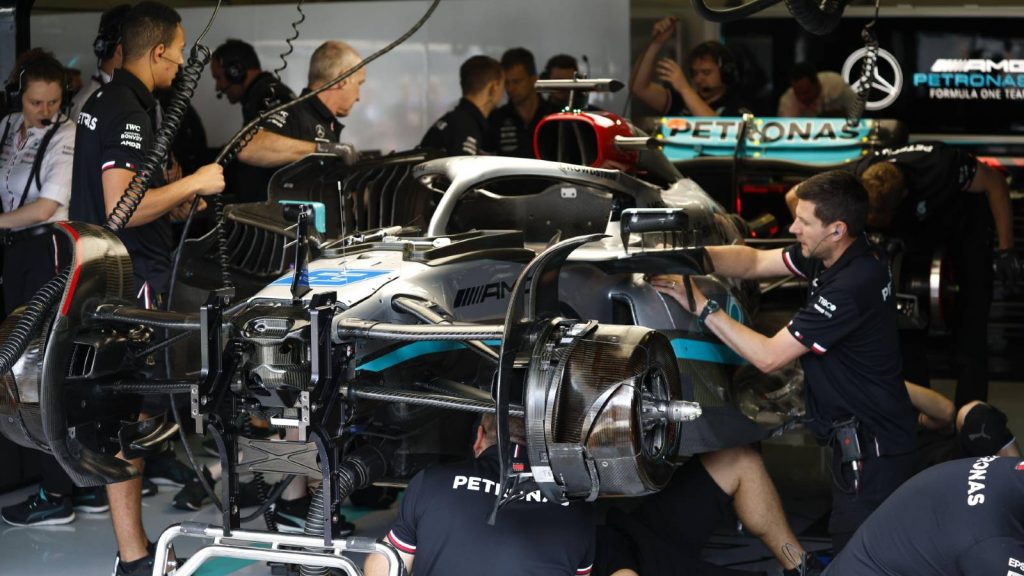 Mercedes’ Andrew Shovlin has revealed when the reigning Constructors’ champions will shift their focus to next season.

With 2022 proving something of a damp squib for Mercedes after eight consecutive Constructors’ championship titles, the key question is when the team choose to give up on their recalcitrant W13 and start concentrating on ensuring the same mistakes do not happen with the 2023 car.

Having taken some minor updates to the W13 for the French Grand Prix, Mercedes were hopeful of making a step closer to the front and joining in the battle for the win. But while the team bagged their first double points-haul of the season, they were never in contention for the victory.

With the French GP marking the beginning of the second half of the 2022 calendar, the first season of F1’s revolutionary new ground-effect rule set, Mercedes’ director of trackside engineering Andrew Shovlin explained the shift to development for 2023 is not as critical as deciding on that changeover point had been last season. This is due to the stable rules meaning far more carryover than 2021 into ’22, which means the ongoing work on the W13 retains relevance for next season.

“In Formula 1 you never actually draw a line,” he told media when asked about when Mercedes might give up on their 2022 car.

“It’s a gradual blend of resources into W13 drifting downwards and [W]14 drifting up. We need some clarity on the regulations, whether they will change, before you’d make a really big shift. But every team will have started some work on next year.

“The difference for us was the early part of the year was very tough, it wasn’t making a lot of sense and it was really firefighting. We are just starting to reach a stage now where we can get back to what we would call business-as-usual development. And that’s actually quite exciting. There are a lot of happy people at the factory now we are sort of getting into a phase that’s starting to make sense to us.

“We need to score points, we need to fight in the championships, but the big one is we must learn to know what we want to do for next year and try to get the car back to the front.”

Shovlin’s comments about clarity refer to the possibility the floor regulations are set to be tweaked in the Technical Regulations for next season. In a bid to combat the effects of porpoising, the FIA wish to raise ride heights significantly for 2023 – this suggestion is being met with pushback from some teams who…