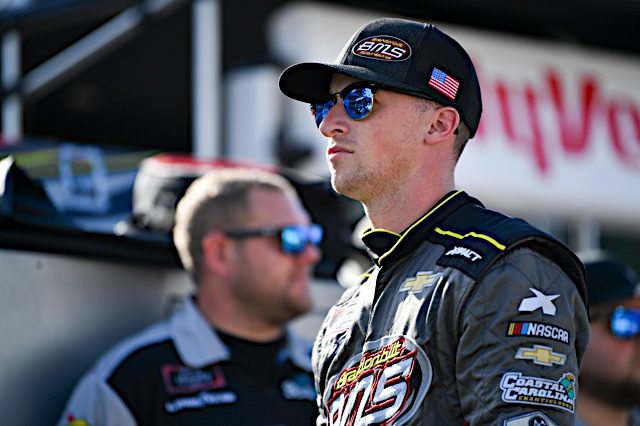 Brandon Brown is unlikely to return to his full-time role in the No. 68 Brandonbilt Motorsports Chevrolet after this weekend’s race at Indianapolis Motor Speedway road course, Brown tells Frontstretch.

Brown, who was already scheduled to drive the No. 47 Mike Harmon Racing entry this weekend after having to step away from his usual No. 68, says financial issues stemming from lack of sponsorship caused the decision.

“As of right now, with all the nos that I’ve got in my sponsorship corner, I got to say that it looks like there will be other drivers driving the No. 68,” says Brown, who is only 66 points below the playoff cut line entering Indianapolis.

While the 28-year-old may not be planning to compete full time, he is looking to compete in select events for the remainder of 2022 — specifically at superspeedways.

“I’ll be back in the No. 68 for a handful of races,” he says. “Definitely Daytona [International Speedway]. I’ll be in the No. 68 in the post-season at Talladega [Superspeedway].

“Other than that? Nah, not really. The team is working on trying to sell some rides to other drivers to keep the funding, which, as heartbreaking as it is for me, I do understand what they have to do to keep BMS in operation … What it’s going to take to grow the No. 68 is having other drivers coming and finding success in it, too.”

While Brown may only be with Brandonbilt for a few handful races, that doesn’t mean he isn’t looking at other rides.

“I’m kind of differentiating myself from Brandonbilt Motorsports,” Brown continues. “I’m going to have to start working pretty hard to secure sponsorship for myself to maybe try my hand at some other cars. Maybe try and work into some different series.

“I feel like I’ve pushed the equipment to its potential. I feel that I’ve found a lot of speed in it and was able to prove myself in this car. Maybe now it’s time to allow others to jump in the No. 68 and start working on Brandon Brown as the driver and see where I land.”

It was announced last week that Austin Dillon will drive the No. 68 Chevrolet for the upcoming Xfinity race at Indianapolis.

Brown says that much of his sponsorship issues are from the repercussions of the politically based chant that stems from his name, which was manifested last October at Talladega.

“I’m still viewed as a political figure,” he says. “I can be viewed as divisive because of the chant. It’s really hard to convince companies…