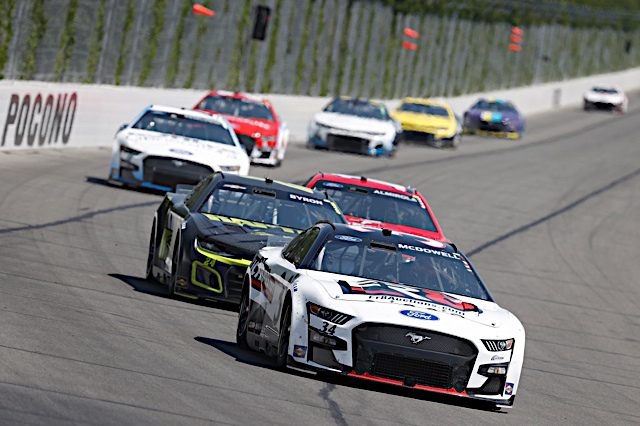 Quite simply, Pocono Raceway is a strange place. It’s considered a tri-oval superspeedway, but can race like a road course. It also provided one of the quirkiest races of the entire season. There are two major stories that stood out from the race, one that occurred during it and one that didn’t.

Of course, the instance that occurred after Sunday’s (July 24) race was Denny Hamlin and Kyle Busch getting disqualified for Joe Gibbs Racing screwing around underneath the vinyl wrap. That’s simply not going to work with how tightly the Next Gen car is officiated.

These disqualifications came down long after the broadcast of the M&M’s Fan Appreciation 400 was done and dusted. That means that the true winner’s interview didn’t occur until Chase Elliott did what amounted to a Zoom call Monday (July 25).

In order to analyze this mess, we have to look to NASCAR RaceHub on FOX Sports 1. On Monday evening’s show, they had Larry McReynolds front-and-center to help explain what happened with the help of a specific tweet from Joe Gibbs Racing and audio from Scott Miller, who appeared Monday on SiriusXM NASCAR Radio.

McReynolds described this situation as another sign that NASCAR is simply not cool with teams messing around with the car in any way. While that is definitely true, this is apparently a new rule.

Back on Wednesday, NASCAR issued a rules bulletin that Bozi Tatarevic talks about in this tweet:

The first change is the addition of a section Q to rule 14.1 stating that parts cannot be added or modified to affect aerodynamic properties of the vehicle. pic.twitter.com/PZIgJCc6G9

This situation with the Gibbs cars came after they apparently violated this new rule. The only reason this didn’t happen earlier this year is that there wasn’t a rule about it yet.

However, the two sources used resulted in a substantial discrepancy. JGR claimed that it was one piece of clear tape, while Miller said it was multiple pieces of vinyl. Someone isn’t telling the truth here because both explanations cannot be true.

The discrepancy is not FOX Sports 1’s fault. It’s the fault of whoever decided to not be fully truthful.

I thought that NASCAR Race Hub did a decent job breaking down the situation. Unfortunately, without the ability to actually see what was underneath the…