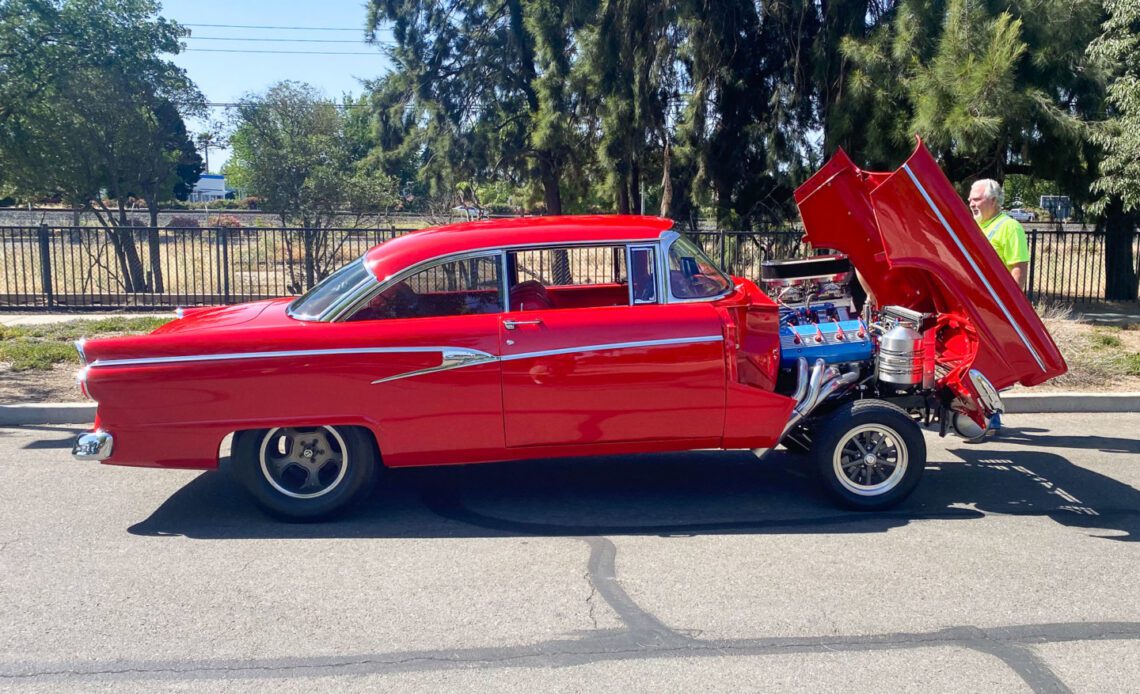 California native George Shields may just have the loudest car in the entire Sacramento region. But dig deeper under the hood of his beautiful ’56 Ford Custom and you’ll find what may also be the most unique vehicle around, as well.

The Gasser-style ’56 is powered by a rather rare Boss 429 Hemi with Aries-Ross Hemi heads, measuring 665 cubic inches. On his preferred Sunoco 110, the engine dyno’ed at 1,065 horsepower naturally-aspirated, and the car has been down the 1/4-mile in 10 seconds flat in its very limited use as a racing machine.

“A fella’ in Kansas built the car, and a guy out of Missouri built the motor. It was sold to a guy in Tennessee and then I bought it from him,” the 72-year-old Shields shares. “My son had sent me a picture of this car two of three years before I bought it, and he said this was the best-looking Ford he’d ever seen stance-wise. I told him, ‘I think you’re right.’ I was buying one of Tony Christian’s 57 Chevrolets from this guy in Tennessee and asked him if he happened to have a ’56 Ford gasser. He said, ‘yeah, I’ve got that car.’ So I flew back to Tennessee and bought the red ’57 and this ’56 from him.”

The car is an original, all-steel 1956 Ford Custom, from bumper to bumper, in practically show-winning condition. There is likewise a full factory-look interior inside. Underneath, a 4-link has been fitted to the frame, and Shields added Competition Engineering wheelie bars for looks.

The 429 is backed up by a Ford C4 transmission that transfers power out to a 9-inch Ford rearend.

Perhaps even more unique than the 1960s/70’s era block and cylinder heads, though, are the carburetors that sit atop it all.

“Back in the late 1960s and early ‘70s, when everybody was doing Trans Am racing with the Boss 302, they were all running cross-ram manifolds with two four-barrels that were staggered. Trans Am outlawed those carburetors, so Ford went and built an inline Autolite carburetor that was two four-barrels in a row. Those were outlawed by Trans Am, then by NHRA and NASCAR. There were about 350 to 400 of these built — there were large and small ones. I’ve got four of them, and a buddy of mine has one,” Shields tells us.

Where did he get these unique carburetors, you might ask? That, too, is a good story.

“We’d been looking for them for years, because they’re just so rare. We found four of them listed for sale by Pro Stock racer racer Warren Johnson, and I bought all…