Breakthrough or blip? Johnson delivered an IndyCar result to match the hype at Iowa · RaceFans 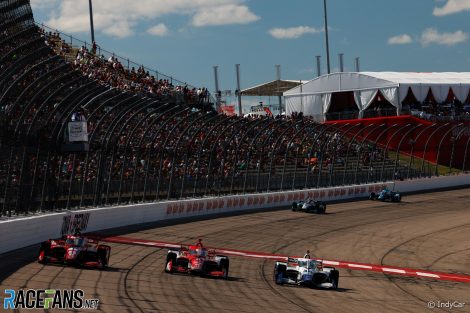 Jimmie Johnson said his experience at Iowa Speedway was the first time that he felt his NASCAR-honed skillset could really translate into success in IndyCar.

It rewarded him with a career-best fifth place finish at the Iowa 300 on Sunday, sealed by a firm-but-fair pass on his Ganassi team mate, and championship leader, Marcus Ericsson.

“I’m so happy to finally have some experience transfer from stock cars to IndyCars,” Johnson remarked afterwards

Part of the seven-time NASCAR Cup champion’s progression this season has simply been down to the fact that, unlike his partial rookie campaign, he is running the full season including all of the oval races. His sixth-place finish at the first of those – Texas Motor Speedway – was evidence that simply being back in a more familiar element would benefit the 47-year-old sophomore.

But this weekend was the first where Johnson felt truly in his element, understanding how to get the most out of his Honda-powered Dallara IR-18. In his words, he’s “just enjoying driving these little rocket ships around.”

“I’m understanding how these cars reward aggression,” Johnson said. “The faster you go, the more downforce these cars create. It takes a lot of energy to turn these tyres on, and make them perform like they need to. I just think I’ve been on the soft side of this since I’ve ever sat in a car.”

“The ovals feel more natural to me, and I’m able to find my confidence, push the car, and have the downforce and the tyres work for me.”

“[On] the street and road courses, I’m making gains. Unfortunately they’re not as obvious as what you can see here on the ovals. But I continue to make gains.”

Johnson also explained that the experience of racing around the 1.4 kilometre (seven-eighths of a mile) short oval – a circuit he’d never raced on prior to this weekend – was also the closest he’d felt to an experience similar to what he experienced at the height of his NASCAR success, where he could set up multiple corners and use multiple lanes to his advantage.

Specifically, he likened the experience of racing at Iowa to two revered ovals exclusive to NASCAR: Bristol Motor Speedway, the rapid half-mile bullring with its high-banked corners; and historic Darlington Raceway, with its abrasive surface that creates intense tyre degradation similar to what IndyCar drivers experienced this weekend…