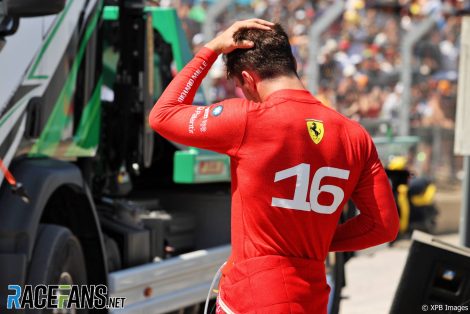 With Charles Leclerc throwing away an opportunity to take more points out of Max Verstappen’s championship advantage in Paul Ricard last weekend, there is only one more chance for him to claim back some momentum before the summer break.

But while the championship battle out front appears to be becoming increasingly one-sided, the midfield battle over sixth place looks to be heating up with Haas bringing their first major upgrades package of the season to the Hungaroring.

Here are the talking points for the Hungarian Grand Prix.

Can Leclerc strike back before the summer break?

The French Grand Prix weekend could hardly have gone better for Ferrari and Charles Leclerc up until the start of the 18th lap of Sunday’s race. After beating Red Bull to victory at the previous two rounds, Ferrari looked in with a strong chance of making it a hat trick of wins at Paul Ricard.

That was until Leclerc’s disastrous crash meant he dropped out of a race while leading for the third time in 2022 – the first by his own hand after two technical problems. With Leclerc out, Verstappen duly extended his already comfortable championship lead by another 25 points, making the prospects of a Ferrari fight back in the second half of the season seem less likely than it ever had before.

However, with just this weekend’s Hungarian Grand Prix before the summer break, there is at least one last chance for Leclerc and Ferrari to gain back some lost momentum and confidence before heading into the final stretch of the championship. Ferrari have tended to be relatively stronger around medium-speed corners so far in 2022, and the Hungaroring has those in abundance.

Red Bull were confident they could have beaten Ferrari to the chequered flag in France even if Leclerc had not thrown his car off the road, but losing out to Ferrari for the third race weekend in a row would have been a first for Red Bull in this 2022 season. Will Ferrari head into the break having outpaced their rivals yet again, or will Red Bull stamp their authority once more?

With a massive, 63-point deficit to his rival, Leclerc badly needs a change of luck. Fortune was not on the side of either him or Verstappen at this track 12 months ago, when both were involved in race-ruining first-lap collisions. If either suffers another misfortune this year, Leclerc badly needs it to not be him.

Magnussen finally gets the upgrades