Ducati World Première 2023: The Presentations of Ducati’s New Products Will Start From September 2 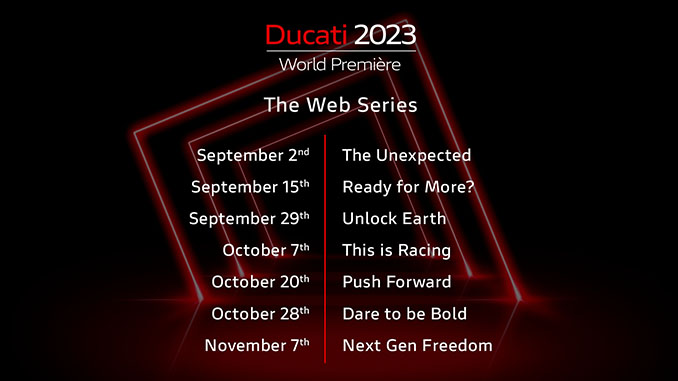 BORGO PANIGALE, BOLOGNA ITALY – July 28, 2022 – (Motor Sports NewsWire) – The Ducati World Première season starts again, the series of events that each year presents the new products from the Borgo Panigale manufacturer for the following season. The streaming of the first episode is scheduled for Friday, September 2 at 1:00 PM EST, on the occasion of the Grand Prix of San Marino and the Rimini Riviera. The series will continue until November 7, when all Ducati enthusiasts can finally see the model unveiled as a preview to participants in World Ducati Week 2022.

Seven episodes will be dedicated to Ducati’s new products for 2023. Between September, October and November will represent the stages of a journey revealing the bikes on the Ducati.comwebsite, on the YouTube channel and on the social media networks of the Borgo Panigale company. These bikes will then be visible live starting Thursday, November 10, when EICMA 2022 will open its gates to the public.

Below is the calendar of all the episodes of the Ducati World Première 2023 web series:

The complete Press Kits of the models revealed in each episode will be available on Ducati MediaHouse following the video streaming.