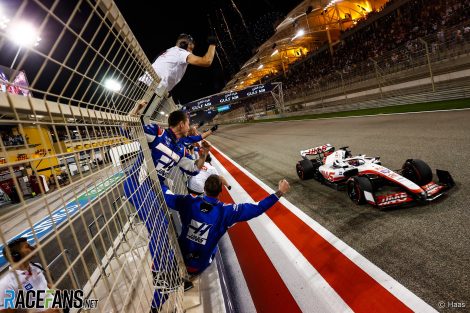 The risk Haas took last season to forgo any development work on their 2021 car to focus all their efforts on their new car for the radical rules changes in 2022 was a bold gamble.

But it was one which paid off immediately when Kevin Magnussen stuck the VF-22 seventh on the grid in the opening qualifying session in Bahrain.

With 15 points over the first four rounds for Magnussen, it was a promising start to the season for the team. However, as their rivals continued to improve their cars with upgrades, Haas remained with their car fundamentally still in the same specification as at the opening race, with only minor track-specific modifications. meanwhile many of its closest rivals have introduced major changes to their cars.

Sitting with media prior to the French Grand Prix, Haas team principal Guenther Steiner said he was “as confident as I can be” about the team’s first major upgrade package due to be introduced for this weekend’s Hungarian Grand Prix – even if he was keeping quiet about what would be changed.

“I cannot tell you anything,” Steiner insisted. “I don’t want to tell you – I want to surprise you! It’s like when your birthday’s next week – if I tell you what I’ll give you as a present, there’s no surprise…

“It’s quite a big upgrade,” he continued. “You will see it on the car without having to investigate ‘is this different?’. There will be changes. It is quite a big package.”

After starting the year with fifth place in Bahrain, Haas scored more points in Saudi Arabia and Imola. A point-less weekend in Melbourne, where they were off the pace, seemed like a blip.

But then came five score-less races between Spain and Canada, which saw Haas drop down to ninth in the constructors’ championship. Steiner says that taught them high-speed tracks are the car’s weakness.

“In Australia, we don’t really know,” he said. “We were far off with the set-up and then I think we got a little bit confused.

“Then the high-speed tracks, they are not really good for our car – that’s my opinion about that. You will have hopefully not the proof in Monza and Spa, but I think our car is a little bit draggy. You can see on the top speed, we are down.”