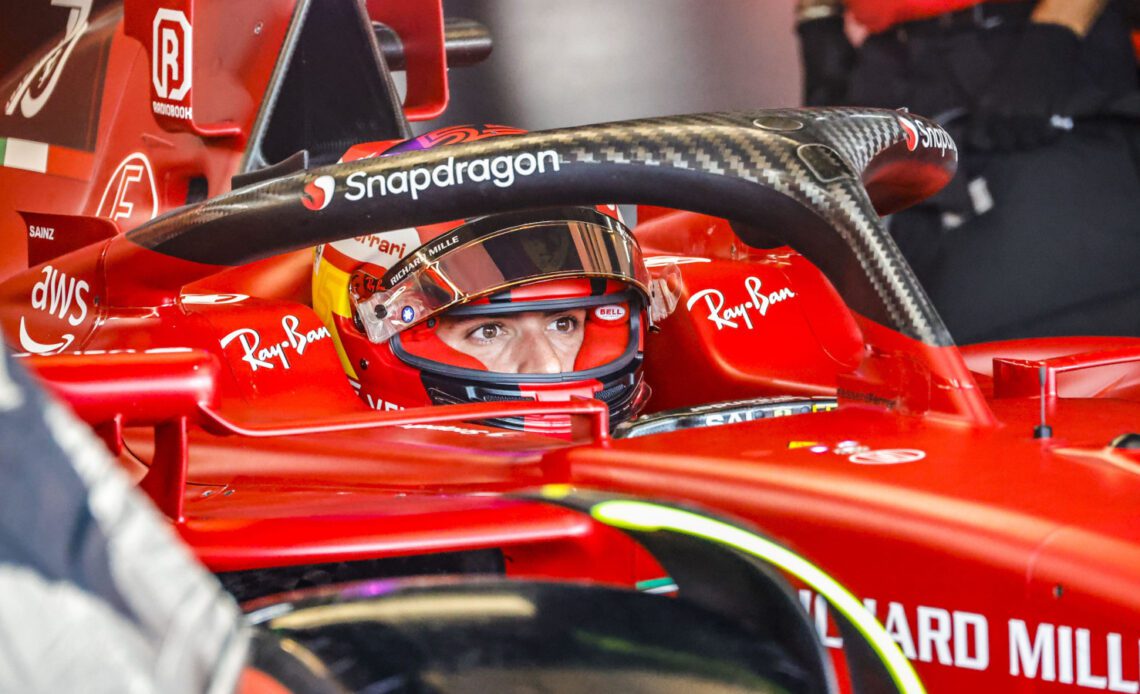 Carlos Sainz won the early Ferrari versus Max Verstappen battle at the Hungaroring as Aston Martin courted controversy and Haas embraced their Ferrari-ness.

Sebastian Vettel, fresh from his retirement announcement, and his team-mate Lance Stroll were the first out on track as they trialled Aston Martin’s controversial new rear wing with its armchair end plate – more drag, but more downforce.

Aston Martin has confirmed that the FIA approved the new high downforce rear wing at every stage of it’s development pic.twitter.com/pWAdum7Yn8

Birthday boy Fernando Alonso got a close up look at the AMR22’s rear wing, the Spaniard having to run wide after closing too quickly on the back of Stroll’s car.

Aston Martin wasn’t the only team to head out with new parts, Kevin Magnussen debuting Haas’ heavily revised VF-22 with its Ferrari-style sidepods. In fact all the teams except Ferrari and Williams had updates bolted onto their cars.

That didn’t stop Ferrari from taking the fight to Red Bull.

Charles Leclerc and Carlos Sainz swapped P1 times with Max Verstappen, the reigning World Champ up after 10 minutes before Leclerc, having asked Ferrari to find him a “gap as it is a mess” in the traffic, hitting the front with a 1:20.2.

He upped that to a 1:19.4, putting 0.25s between himself and Verstappen at the halfway point.

Bolting on a fresh set of softs, Verstappen leapfrogged both Ferrari drivers while the Scuderia team-mate struggled to improve their times. Sainz ultimately went for two cool down laps before laying down a 1:18.750 to finish P1 by 0.13s ahead of Verstappen. Leclerc was third.

Lando Norris was fourth for McLaren, putting in a late soft tyre run to work his way up the order. George Russell also entered the fray as he swapped his hard tyres for a set of the soft Pirellis, the Briton running as high as P2 before falling to fifth as others completed their late-session soft tyres runs.

His session, though, wasn’t without problems as early in the session he asked Mercedes to “check you’re happy with the PU. A little bit of a strange noise coming from the turbo as I lift off”.

Mercedes did not detect a problem and the driver continued lapping. However, late in the session he was told to “lift and coast, we need to cool the PU”.