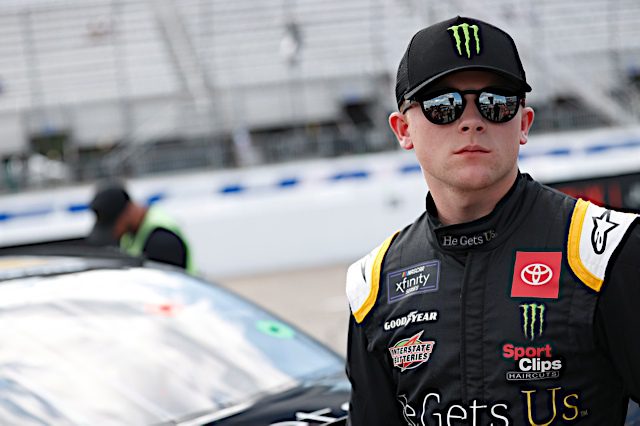 Ty Gibbs was always going to be a NASCAR Cup Series driver; there’s been little doubt about that ever since he broke onto the national scene by winning his NASCAR Xfinity Series debut last year at the Daytona International Speedway road course.

The timing and logistics of that move, however, have been murkier. Despite four wins in 18 Xfinity starts in 2021, Gibbs still needed a full season to really show what he was made of, that his early success at Joe Gibbs Racing wasn’t a fluke based on the resources being given to a car that also featured Cup regulars.

OK, but then there was team owner/grandfather Joe Gibbs’ statement earlier this year that he wanted Ty in an Xfinity car for at least two years.

And the general blockade at JGR on the Cup level, ostensibly Gibbs’ eventual destination, too. Denny Hamlin is good through at least 2023. Martin Truex Jr. is there through next year. Christopher Bell‘s status is unknown but he did at least just win a race. And Kyle Busch certainly wouldn’t leave JGR, right? … right?

Fast forward to this week. Busch’s whereabouts past 2022 have come into question as his team and JGR struggle to come to an agreement on a contract extension. A 15-season partnership could be coming to an end after the checkered flag flies at Phoenix Raceway in November.

Last weekend, Gibbs made his Cup debut, filling in for the injured Kurt Busch at 23XI Racing. He did so on hours’ notice, stepping into the No. 45 once Busch was announced as without medical clearance on Sunday morning, July 24.

On the surface, it might have seemed like an inauspicious effort. He crossed the line 18th at race’s end, bumped up to 16th in the record books after Hamlin and Kyle Busch were disqualified post-race. A top 20 is going to be a good start for most debuting drivers, but after all the hype Gibbs had coming in, did it really raise any eyebrows?

Well, yeah. After starting at the tail end of the field due to the driver change, Gibbs was only 32nd mid-race. But he began to climb in the second half, rising as high as fourth and running near the top 10 late before eventually coming home 16th.

And consider this: that was done in a car that had not yet been on track due to the team’s…