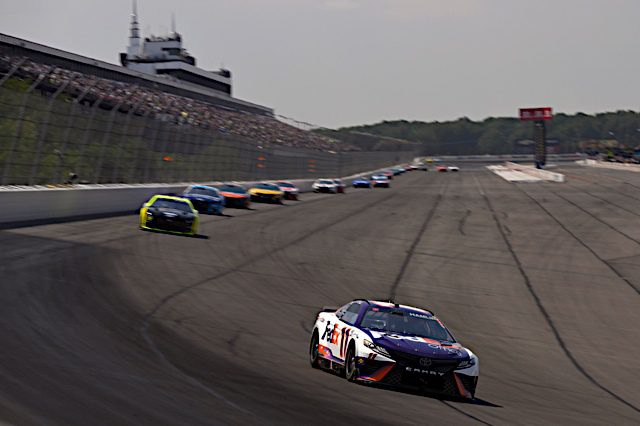 How will Ty Gibbs do in his second NASCAR Cup Series start, and is he making a case for Cup in 2023?

Ty Gibbs got the call to replace Kurt Busch in the No. 45 car after he was not cleared to race at Pocono Raceway last weekend, and the youngster will be filling in again this Sunday (July 31) in Indianapolis.

Gibbs’s debut got off to a rocky start, as he started in the back and was running around 30th place for much of the day. However, he kept his car clean and made steady gains throughout the second half of the race. By the time the checkered flag fell, he finished a solid 16th place in his Cup debut.

For a driver with the amount of hype that Gibbs has, he had a lot to live up to, as he was a heavy betting favorite to at least score a top-10 finish. But even though he wasn’t able to clear that hurdle, that shouldn’t be much of a concern.

The drop of the green flag was Gibbs’ first time in the Next Gen car, as he was only able to practice on simulators the night before. The most important results of his debut are that he got better as the race went on and didn’t make any mistakes. With practice and qualifying this weekend at Indianapolis, Gibbs will eclipse his debut performance at Pocono.

However, Gibbs would be best suited to remain in the Xfinity Series for another year. But if he has a top-five run this weekend or wins the Xfinity Series championship at Phoenix Raceway in November, the question of him moving to Cup should be brought up again.

Was Denny Hamlin right to retaliate against Ross Chasten the way he did at Pocono?

Everyone saw it coming from a mile away, and Denny Hamlin finally set the story straight with Ross Chastain at Pocono last weekend. While racing for the lead on a restart with 18 laps to go, Hamlin drove up the track and left Chastain with little room in the top lane through turn 1.

Chastain then hit the wall after running out of room and ricocheted into the path of Kevin Harvick before coming to rest at the inside wall.

Even though Chastain knew that retaliation was headed his way, Hamlin could have handled the payback better than he did. Pocono is one of the longest and fastest tracks, and Hamlin extracted his payback on a restart with the entire field behind him. Chastain’s crash had the potential to collect more than half the field when he turned back into traffic, as an onslaught of drivers had to dodge and quickly speed around his spinning car. Given how bunched up the field was, it was fortunate that only…