Do Kyle Larson And Chase Elliott Need A Cookie? 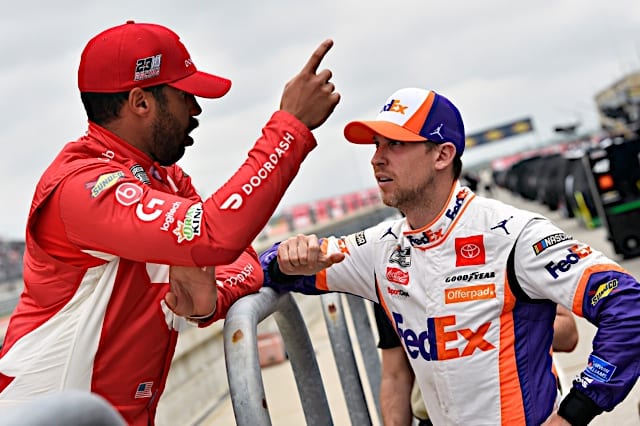 1. Could we see a Larson vs. Elliott championship fight?

If there is one thing that the postseason format has brought into NASCAR, it’s that the first 10 to 15 races do not matter as much as those just before the postseason. Like any other sport, it’s key to be at your best going into the postseason. Take baseball’s Atlanta Braves last year. As this Braves fans will admit, Atlanta was not baseball’s best team during the year, but it played its best when it counted the most.

It’s why Chase Elliott fans should not be celebrating right now. Other than the 15 bonus points it brings, a regular-season title has about as much use as a roll of toilet paper. Sure, it’s a nice feather in the cap, and diehard fans of the No. 9 driver will buy postseason merch that Chase’s digital team wisely put on sale within 24 hours after Elliott clinched the regular-season title, but it matters little if 2022 does not end with Elliott winning the championship.

Elliott has proven that he can run well at most any track, and despite Sunday’s near-miss, he’ll be a formidable driver to deal with in the postseason. That’s where Sunday’s winner, Kyle Larson, comes in. Nothing quite uplifts a team that can win like doing so going into a key stretch of the season. Getting back to victory lane, as we saw with Kevin Harvick, does a lot to give a team an extra jolt. And for a team that covered the field for a good part of last year, Sunday’s Watkins Glen win may very well make them a larger contender to win a second title in a row.

Speaking of Larson and Elliott, is it time for one of Rick Hendrick’s kumbaya sessions made famous by the Chad Knaus/Jimmie Johnson “milk and cookies” story?

Hendrick Motorsports is hardly the first team to have two drivers that want to be the “alpha dogs” of the pack. Both are winners of one of the last two championships, and you would not expect either to willingly play second fiddle to anyone.

Twice this year, Larson has gone door-to-door with Elliott late en route to a win. Sure, it’s hard racing and going for the win as opposed to just filing in single-file and being content to finish second. That’s what everyone wants … well, except the driver in second.

If there is any ill will between the two, it probably needs to be mended soon, either by this week at Daytona International Speedway or by Bristol Motor Speedway, which hopefully someone…