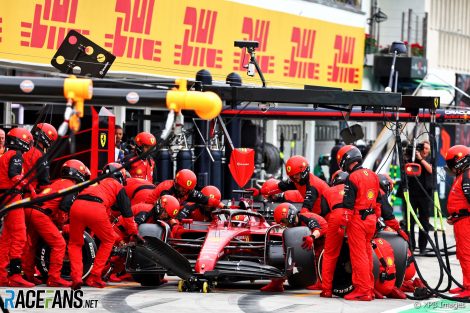 After almost a month without racing, Formula 1 reconvenes at Spa-Francorchamps for one of the highlights of the grand prix calendar – the Belgian Grand Prix.

This season’s race at the iconic seven-kilometre circuit will look very different as the track has received a major facelift to improve safety. But will it also prove to be the last race held at one of series’ most popular venues? There are serious doubts the track will reappear on the 2023 F1 calendar.

Have Ferrari solved their strategy woes?

If Ferrari are to have any faint hope of somehow trimming Max Verstappen’s championship lead in the final nine rounds of the season, every race weekend has effectively become a must-win.

The pace of their car has been strong throughout the first part of the year, but both Ferrari and Charles Leclerc have thrown away too many points. In Paul Ricard, Leclerc hung his head in shame after a costly crash. But at the Hungaroring, Ferrari’s strategists dropped the ball in the latest in a series of head-scratching decisions.

Ferrari team principal Mattia Binotto has regularly defended his team’s calls – perhaps unsurprisingly – but the team now has to show it has spent its summer break learning from its mistakes and will be able to put Leclerc in positions to consistently win races, not take him out of them.

Of course, this is reliant on them managing to outpace Verstappen and keep the Red Bulls behind them on track – no easy task. But this is the hole Ferrari have dug themselves into over the first 13 races. Even if this season is indeed lost, then galvanising as a team over the final leg ready for a fresh assault in 2023 becomes paramount.

A new look to an old classic

Spa-Francorchamps has undergone major changes since Formula 1 departed last August following the non-event of a ‘race’ that took place last year. Happily, the actual track layout remains virtually untouched, with work focused on making the circuit safer and allow it to host motorcycle racing once again.

For this weekend’s grand prix, the biggest change drivers will find is the vastly increased run off at Raidillon, with the old banked verge on the outside of the sweeping corner removed, allowing for the tyre barriers to be pushed back and an impressive new grandstand added. Thankfully, the corner itself remains unchanged and the Eau Rouge sequence should be just as awe-inspiring as ever.