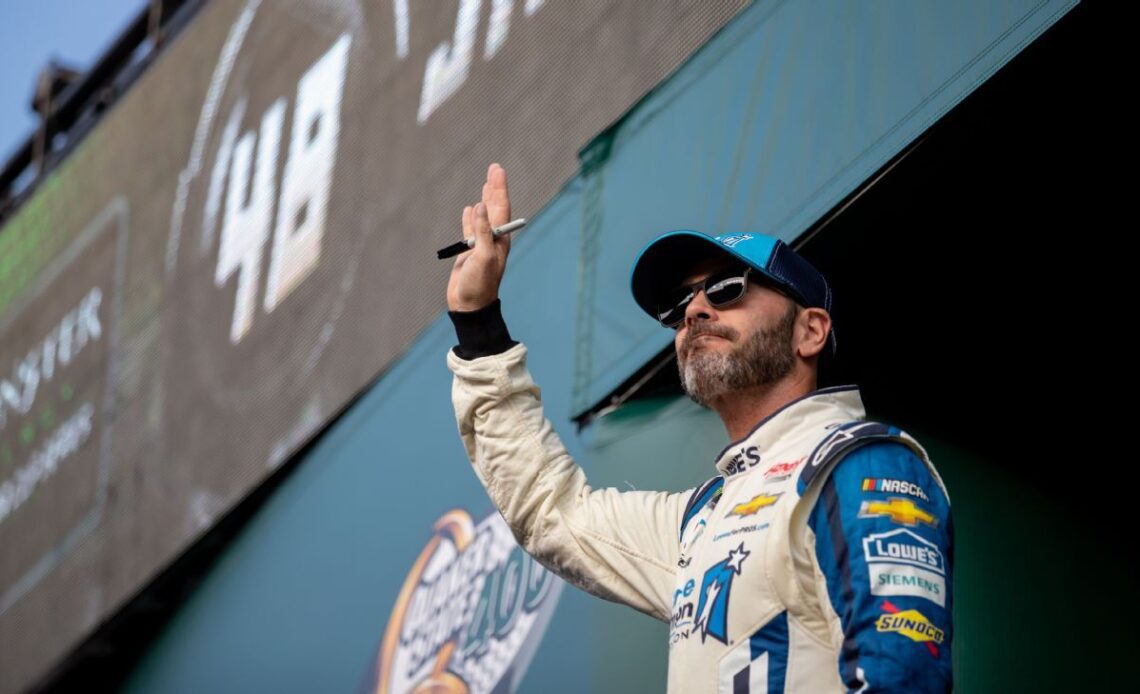 A man walks into an airport, walks up to the giant board titled “Departures,” and with a packed bag at his side, looks upon the dozens of cities listed, knowing that he can board any single one of those airplanes headed to any destination of his choosing, no questions asked. A golden ticket. A passport to the world. A bucket list. A Genie Plus Lightning Lane with no restrictions. Use whatever metaphor you want. What it is, is a feeling of true freedom.

No, this is not about George Clooney in the closing scene of the 2009 Oscar-nominated film “Up in the Air.” It’s about another handsome, graying, legend-in-his-own-time who now finds himself standing in front of a blank itinerary that he can fill with whichever stops and stations that he has ever desired. But that’s not a roller bag in his hand. It’s a helmet.

“What I’m doing now, it’s about the experience,” Jimmie Johnson said Tuesday. “This allows me to open up the runway and gives me more time to experience this.”

On Monday, Johnson revealed that he was stepping away from full-time racing after two seasons — one part-time, one full-time — in the IndyCar Series. But, as the seven-time NASCAR Cup Series champion preached as he left stock car racing at the end of 2020, he doesn’t want to hear the word retirement. “I tried to retire once, and that didn’t work out,” the 47-year-old joked.

Geez, is he right about that.

– Watch Formula One all season long on ESPN
– Don’t have ESPN? Get instant access

Since his final NASCAR start, a fifth-place finish in the Nov. 8, 2020, season finale, he has made 29 IndyCar starts, including 2022 Indy 500 Rookie of the Year honors, and ran another half-dozen in the IMSA WeatherTech SportsCar series, starting with a podium finish in the Rolex 24 at Daytona, his third runner-up effort in the race.

But for every race and series he has run, there are at least a handful of events and race cars that he wasn’t able to enter or drive because of a full-time IndyCar commitment that he repeatedly confessed this season was more than he had anticipated.

“Man, I’ve had racing friends from all over the world calling and saying, ‘You should come try this series I’ve been running in’ and it sounds so awesome,” Johnson explained one year ago, laughing. “But then when we hang up, I’m Googling that series because I’ve never even heard of it, and I’m like, ‘Oh man, that does…