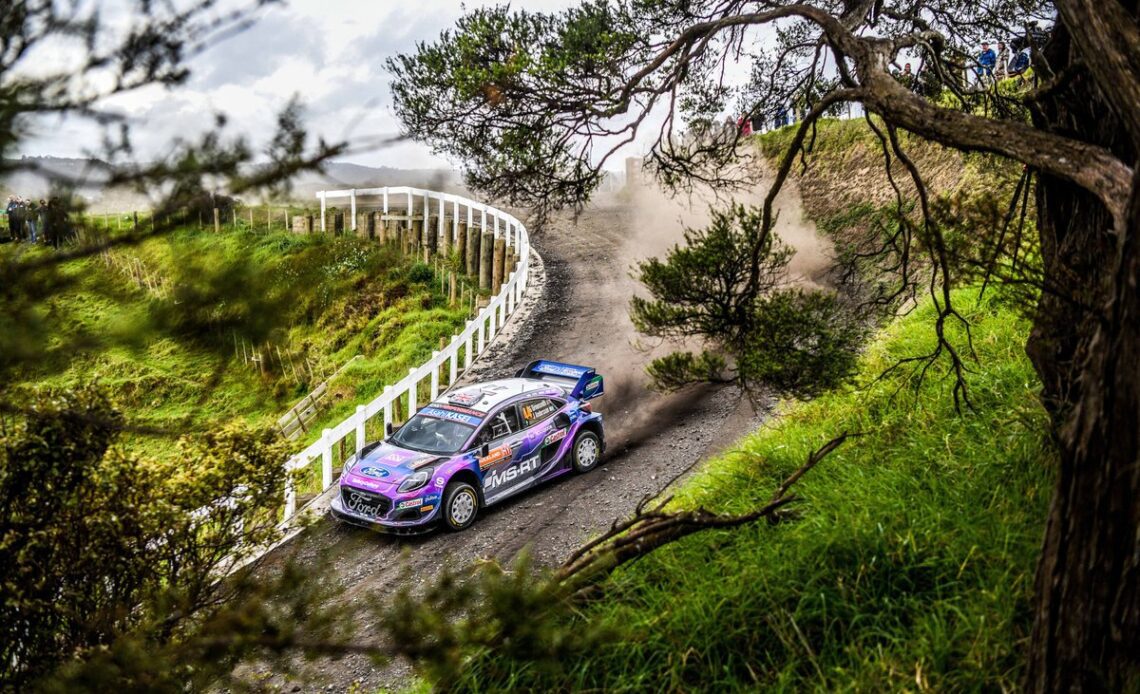 Tanak completed the trio of stages with a 2.6s advantage over Breen and Toyota’s Elfyn Evans, while Gus Greensmith sat 9.0s behind the podium places in fourth after an impressive display from the M-Sport driver.

Returning eight-time world champion Sebastien Ogier was fifth ahead of championship leader and road opener Kalle Rovanpera, who was 10.7s adrift. Rovanpera could secure a historic maiden world title at the event, which returns after 10-year hiatus, if he outscores Tanak by eight points.

Rain had doused the gravel stages overnight to add to the challenge for the crews on Friday morning.

Drizzle continued to fall as the drivers arrived at the famous Whaanga Coast stage, but it didn’t hamper Greensmith, who produced one of his best drives of the season.

Greensmith set a blistering pace through the iconic New Zealand coastal road to win the stage, which was only the second stage win of his WRC career, following his triumph in Monte Carlo in January.

Breen was another driver to make the most of road position to set the third fastest time, which was enough to leapfrog Tanak – who was fourth fastest – into the lead of the rally.

First on the road, Rovanpera, did well to only lose 13.2s, while Hyundai’’s Thierry Neuville dropped even more time after struggling with the rear end grip on his i20 N.

The longest stage of the rally was next up for the crews which would provide a couple of hair raising moments as the weather continued to close in.

Neuville was caught out by a compression on a fast right, left sweep which resulted in the Belgian spinning the i20 N into a bank. Luckily, he was able to keep going and reach the stage finish.

“There was a bump with some water and the rear spun around and the engine stalled,” said Neuville. “I think there is damage, but it was quite narrow and not easy to recover.”

Moments later, Toyota’s Takamoto Katsuta was caught out by the same corner but avoided contact with the grass bank.

It was Evans that topped the times as the Welshman enjoyed a clean run through the slippery test. Incredibly he would pip Rovanpera, Breen and Tanak, who all set identical times across the 31.48km run, some 1.3s adrift.

“It’s a really nice stage, this one,” said Evans. “Difficult to find…