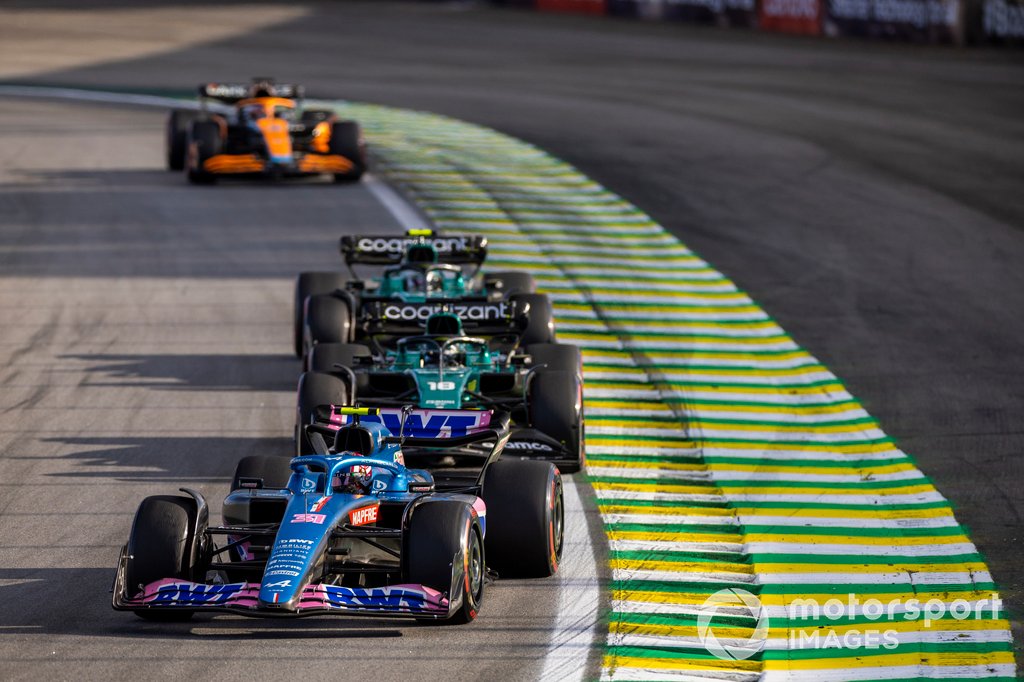 Alonso and Ocon appeared to make contact twice on the opening lap of Saturday’s 24-lap sprint race in Brazil, the first moment coming at Turn 4 when they went side-by-side into the corner.

Alonso was forced wide at the exit of the corner, but the more dramatic incident came as they completed the lap when they made contact going across the start/finish line.

The front wing of Alonso’s car was damaged when it made contact with Ocon’s right-rear wheel. It forced Alonso to pit for repairs and prompted an angry response from the Spaniard, who said on the radio: “I lost the front wing thanks to our friend.”

The stewards confirmed after the sprint race they would be investigating the main straight incident, and deemed after hearing from both drivers that it was Alonso who was to blame, resulting in a five-second time penalty.

This was because Alonso was “significantly faster” thanks to the tow and some aerodynamic damage that Ocon picked up at Turn 4. The stewards said that Alonso admitted in the hearing that he “slightly misjudged the time to pull out and struck Ocon from behind, his front wing striking Ocon’s rear tyre”.

The FIA bulletin added: “The Stewards found that Alonso was wholly at fault for the collision, which at those speeds and at that location on the track was dangerous.”

The penalty drops Alonso back to 18th on the grid for Sunday’s Brazilian Grand Prix, while he also collects two penalty points on his FIA superlicence, taking him to six for the last 12 months.

Ocon struggled badly for pace after the lap one clash with Alonso, who overtook him despite pitting to change his front wing before the penalty dropped him back behind

Team principal Szafnauer did not speak publicly about the incident after the sprint race, but slammed both Alpine drivers in the team’s press release issued on Saturday evening, having thrown away high starting positions amid the close battle for P4 in the standings with McLaren.

“Frankly, both Esteban and Fernando must do a better job to compliment the fantastic efforts of everyone in the team by avoiding on-track incidents and compromising the entire team’s performance,” said Szafnauer.

“Today, both drivers have let the team down. I expect more from them tomorrow where we must do everything we can to recover some points from the weekend for the championship.