Alonso just wants to get on with Aston Martin F1 future 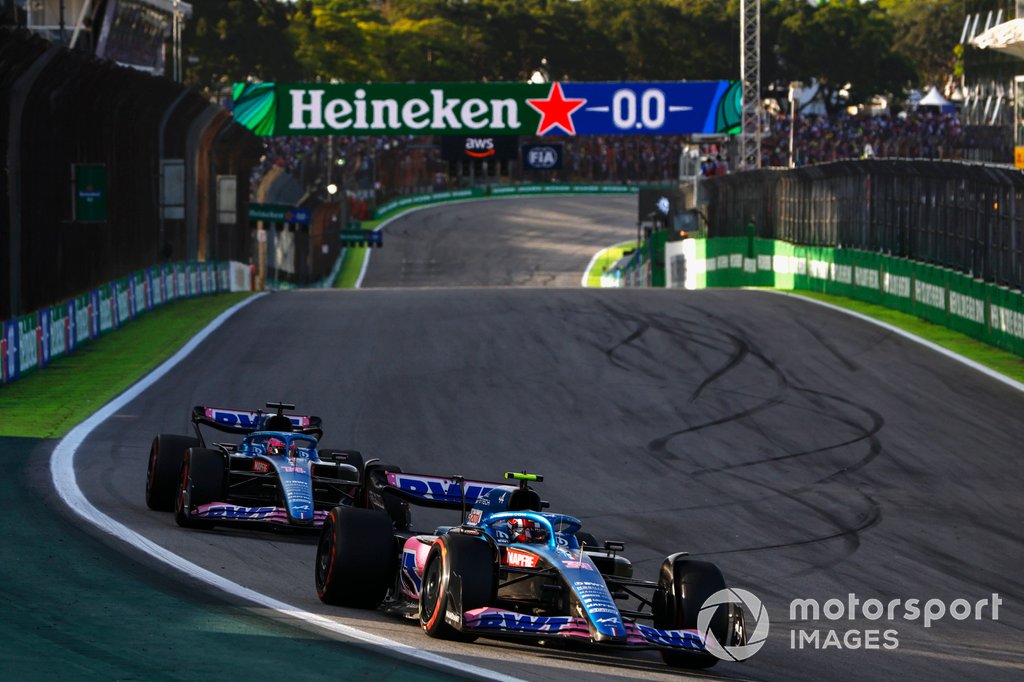 The Spaniard made contact twice with Ocon on the opening lap of the Brazil GP sprint race at Interlagos on Saturday.

Having been forced wide at Turn 4 on the opening lap, he slid into the side of Ocon on the exit. Then, further around the lap as they neared the start/finish line, Alonso damaged his front wing after clipping his teammate’s right rear tyre as he attempted an overtaking move.

While the Spaniard was unimpressed at Ocon’s actions in both incidents, the stewards deemed Alonso at fault for the second clash and gave him a five-second penalty.

Alpine team boss Otmar Szafnauer has made clear that he is not happy with how both drivers behaved, but Alonso says he is not interested in what is going on at his current squad as he begins to look forward to his move to Aston Martin for 2023.

He is due to get his first run in Aston Martin’s F1 car in the post-season test at Abu Dhabi.

“Now in the penultimate race, I just want to go to Abu Dhabi and test the green car,” he said. “So that’s my main goal now.”

The Brazil incident is not the first time that Alonso has had trouble with Ocon as he suggested his teammate was quite harsh when it came to defensive moves.

“I have been very close to the wall this year on a few occasions – in Jeddah, and in Budapest I remember as well,” he said.

“It seems that when we start too close, there is this – yeah – defending in races. It is the way it is, nothing we can do.”

Asked if he felt a proper sit-down talk was needed with Ocon to sort things out, Alonso said: “I don’t know, I don’t think that it’s needed, anything else.

Ocon himself did not think that there was any need for special discussions or interference from the team.

Asked if he had spoken to Alonso after the Brazil sprint, he said: “No, it’s fine.”

The situation between Alonso and Ocon divided opinion among fans and triggered some toxic messages on social media, something that Alpine spoke out about.

In a tweet, the Enstone-based squad said there was no excuse for the number of “hateful” comments that had been aimed towards the drivers, the team and other fans.

“We will take action against individuals or groups who produce or…