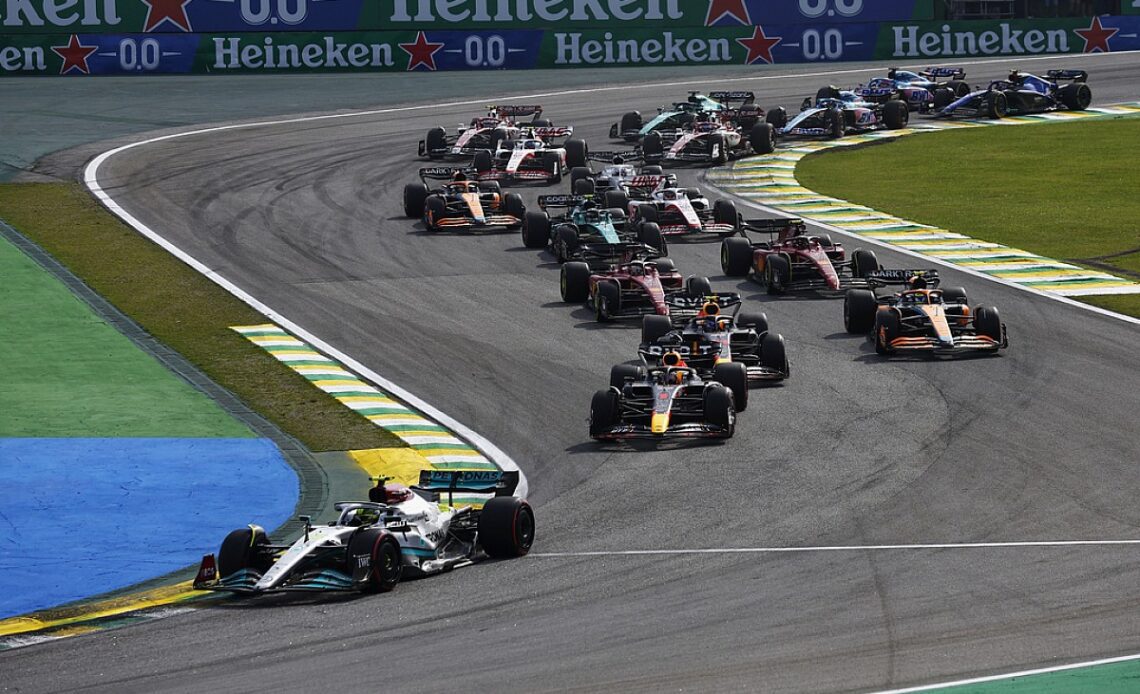 Russell led for the majority of the race, while his teammate Lewis Hamilton was hit by his old Red Bull nemesis Max Verstappen following a restart, which forced Verstappen to pit for a new nose.

Hamilton dropped to eighth but recovered back to second, finishing ahead of both Ferraris. Verstappen recovered to finish sixth.

How the Brazilian Grand Prix unfolded

Russell held his pole advantage on the run to Turn 1, leading Hamilton and the Red Bulls of Verstappen and Sergio Perez. McLaren’s Lando Norris attacked Perez down the inside at Turn 1 but soon had both Ferraris on his tail. Moments later, Daniel Riciardo’s McLaren tapped Friday’s pole-winner Kevin Magnussen into a spin at Turn 8 and collected Ricciardo, who clattered into the tyrewall.

The race went green on Lap 7, with Russell heading Hamilton, Verstappen, Perez and Norris. Verstappen lunged around the outside of Hamilton at the Senna-S and they collided approaching the apex of Turn 2, causing Verstappen to pit for a new front wing as Hamilton dropped to eighth.

Norris then punted Ferrari’s Charles Leclerc off the track at Ferradura, sending him spinning into the wall and into the pits for a new nose. Verstappen and Leclerc dropped to 17th and 18th respectively, with Verstappen and Norris both receiving 5-second penalties.

Russell extended his lead to 1.5s by Lap 10, as Ferrari’s Carlos Sainz passed Norris for third at Turn 1. Aston Martin’s Sebastian Vettel was now up to fifth, ahead of the recovering Hamilton – who passed Mick Schumacher (Haas) and Pierre Gasly (AlphaTauri) in quick succession.

Hamilton passed Vettel at Turn 1 on Lap 14 for fifth, and DRS-ed past Norris for fourth a lap later. Vettel moved past Norris on Lap 17 to claim fifth, while Sainz was forced to pit early due to a visor tear-off getting stuck in his right-rear brake duct, which put Hamilton back into the podium positions.

Russell was almost four seconds clear when Perez stopped on Lap 24, and he rejoined mired in traffic. Russell pitted a lap later, and despite a slower stop, rejoined 3.6s clear and with Vettel between them until he pitted on Lap 27.

Hamilton led at this point, and ran long until pitting on Lap 30, rejoining in fourth behind Russell, whose lead at half distance was up to almost 6s over Perez.