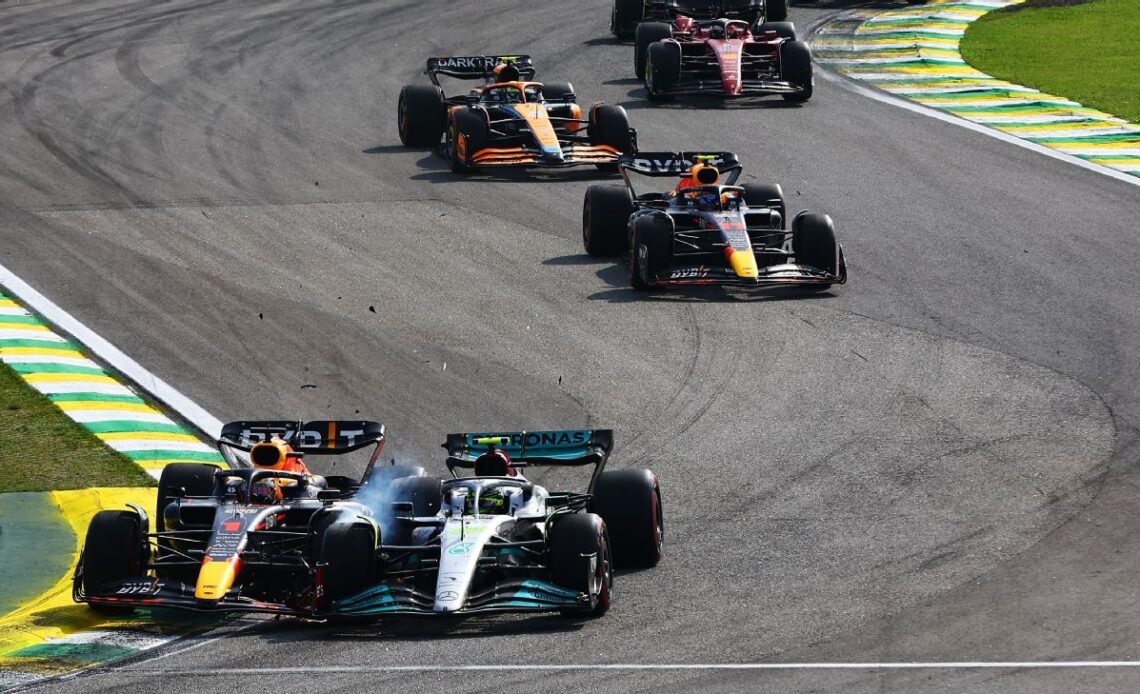 Max Verstappen holds Lewis Hamilton to blame for their collision at the Brazilian Grand Prix, saying he knew as soon as they went wheel to wheel in Turn 1 that they would collide in Turn 2.

The incident revived memories of the pair’s epic title battle last year as they collided on the seventh lap of the race while fighting for second place.

Hamilton held Verstappen off as the Red Bull attempted to go around the outside of the Mercedes at Turn 1, compromising Verstappen’s entry into Turn 2 before the pair collided at the apex of the corner.

“To be honest I went around the outside and immediately felt he wasn’t going to leave space, so I just went for it,” Verstappen told Sky Sports.

“He didn’t leave me space so I knew we were going to get together. It cost him the race win and it gave me five seconds. It wouldn’t have mattered anything for my race.

“It’s just a shame, you know? I thought we could race quite well together but clearly the intention was not there to race.”

When asked about the incident immediately after the race, Hamilton simply said: “You know how it is with Max.”

Asked about that quote and if he had concerns about Verstappen’s approach to racing in a post-race press conference, Hamilton added: “I’m not concerned. I don’t have any concerns.

“I think it’s natural when you have the success and the numbers on your chest that you become a bit of a target. But it’s OK, it’s nothing that I’ve not dealt with before.”

Hamilton said his main thought immediately after the incident was getting his car back into a position to complete Mercedes’ one-two victory, which he succeeded in doing behind teammate George Russell.

“For me, all I thought in that moment was that I would have to retire the car, because the rear wasn’t feeling the same after that,” he said. “It was like I was going to lose the team a one-two and that’s all I could think about.

“So I was driving across the grass back onto the track and all I could think about is how I could get back and give the team that result. It’s not how you fall, it’s how you get back up and I’m proud of the job we’ve all done and huge congratulations to George.”

The stewards found Verstappen “predominantly” to blame for the incident, giving him a five-second in-race penalty and two penalty points on his licence.