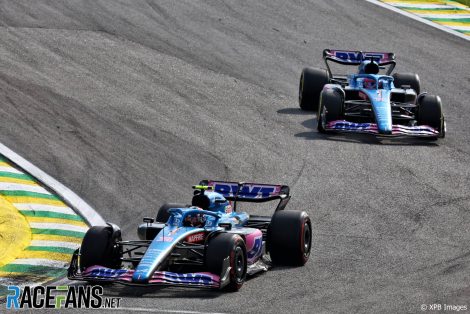 Verstappen claimed his second consecutive drivers championship victory earlier this year. But subsequently Red Bull was found to have exceeded last year’s $145 million budget cap by $2.1m. The team was fined $7 million and had its aerodynamic development allocation cut.

However Perez insists Verstappen does not owe his success to Red Bull overspending. Speaking before yesterday’s Brazilian Grand Prix, Perez told The Telegraph that Red Bull “didn’t get any performance benefit” and “Max didn’t win the championship last year” due to the team overspending. “So for other teams to take advantage of that, and try to make Red Bull look bad, it’s really unfair. And it shows they can be bad losers.”

Alpine will go into the final race of 2022 “feeling a bit more secure” in their fight with McLaren for fourth place in the championship after the points haul they took in Brazil, says Esteban Ocon.

“I think we did everything perfect today in terms of extracting the maximum that we had in our hands,” he said. Ocon finished eighth from 16th on the grid while team mate Fernando Alonso gained 12 places to finish fifth.

“It’s a great day for the team, 14 points. The three-stop strategy was the one to take today obviously, as Fernando benefited, but on the two-stop we did everything we could and overall to get 14 points it’s huge over McLaren and we can be very happy.”

Despite running as high as third early in the Brazilian Grand Prix, Lando Norris believes he was on course for a low-order points finish at best before retiring with a technical problem.

‘Normally, you’re able to unlap yourself under the Safety Car, but today I was told to stay in my position, so we ended the day a whole lap behind the pack, with no opportunity to make my way forward.’